Wisconsin picked up a win over Minnesota at home last time out, its second consecutive victory. However, the Badgers have failed to cover in three consecutive outings after five straight covers from Jan. 3-18. The Badgers hit 42% (24-of-57) from the field, including just 32% (6-of-19) from behind the 3-point line, while hitting 80% (12-of-15) from the free-throw line. The Badgers managed to take good care of the ball, too, turning it over seven times. Wisconsin also held a slight 31-to-29 edge in the rebound department.

Illinois picked up a pair of victories in the past week, two low-scoring wins at home against Michigan State and on the road against Northwestern. The win over the Spartans was 56-55, while edging the Wildcats 59-56. The offense has gone out the window lately. Kofi Cockburn hit 10-of-17 from the field in his return to the lineup after concussion, going for 22 points and nine rebounds. That's it, as every other player went for six or fewer points exception for Alfonso Plummer with nine points.

The Fighting Illini is on a season-high 0-4 ATS skid, matching an 0-4 ATS slid from Nov. 15-26 during the non-conference portion of the schedule. Prior to this skid, the Illini went 5-1 ATS against the number.

Illinois has really hit the skids on offense, averaging just 60.0 PPG across the past three outings, but the defense has yielded just 55.5 PPG in the past two games leading to a pair of victories. It's no surprise the UNDER has hit in each of the past two wins. 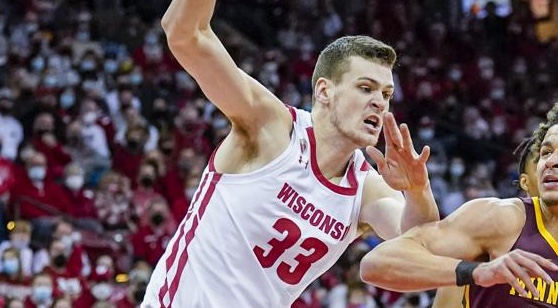 Wisconsin has cashed in six of the past eight games on the road. (AP)

The Badgers hit the road for Champaign, and the result of this game will shake up the logjam at the top of the Big Ten, with these teams and Michigan State each sitting at 8-2 inside the conference.

I like the Badgers, as they're not particularly flashy, but they generally get the job done. They've won four straight road games inside the conference dating back to a loss at Ohio State on Dec. 11 as five-point underdogs. Wisconsin has had difficulty against the spread lately, but I think they're going to have trouble against Illinois.

The Illini have also struggled against the number lately, but they have been tested while not playing their best basketball, gritting out a pair of wins over Michigan State and Northwestern. They're due for a hot shooting night, and what a good time for it with Wisconsin paying a visit. I think the Illini show some signs of life, but the Badgers are able to keep it close.