The Hawkeyes are looking to snap a two-game skid. Losing at home against Purdue last Thursday isn't embarrassing, as Iowa fell 83-73 as two-point underdogs. But an overtime loss at Penn State as five-point favorites is not a good loss. Defense has gone into the pichadoo, too, as the Hawkeyes have allowed 86.5 PPG in the two losses after yielding 49.5 PPG in the previous two games.

The Buckeyes suffered a loss at Purdue on Sunday, but it was a respectable 81-78 loss as 9.5-point underdogs, easily hitting the number. In fact, Ohio State has covered three in a row, which is a season high. The past two wins have not only been inside the conference, but on the road. So they're battled tested and ready to rock. The last time the Buckeyes were home, they stepped out of conference to rough up IUPUI of the Horizon League, 83-37 as 33-point favorites.

As mentioned, the Hawkeyes have dropped two in a row, and they're 1-3 SU/ATS across the past four outings. The good news is that Iowa hasn't failed to cover three or more in a row since an 0-5 ATS slide from Jan. 21-Feb. 7, 2021 last season, a stretch which included a game against Ohio State. The last meeting went to the Buckeyes, 89-85 in Iowa City on Feb. 4, 2021.

The Buckeyes have covered each of the past three games, and the run is a season high against the number. The last time the Bucks fired off three or more covers in a row during the regular season was a 5-0 ATS run from Jan. 31-Feb. 18, 2021, a stretch which included a trip to Iowa City.The Buckeyes have rattled off five covers in the past seven games at home. For totals, the OVER has cashed in 12 of the past 17 games overall, while hitting in eight of the past 11 as a favorite. The OVER is also 5-2 in the past seven against teams with a winning overall record. 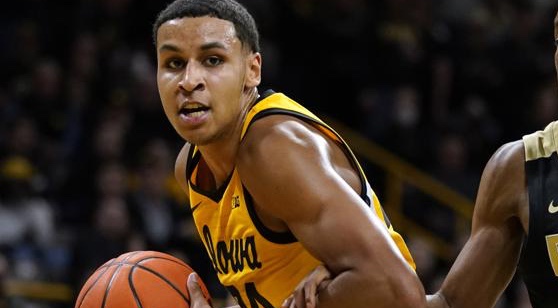 The big story in this game is that Connor McCaffrey is nursing an arm injury which he suffered in the Penn State game, and he is a major question mark for this game. The exact source and severity of his injury isn't known, but if he sits, and again, that sounds likely, it's a big blow to the team since he ranks second on the team with 11.1 PPG, while posting 3.5 RPG and 1.7 APG in 19 games.

Iowa has struggled on the road, and facing a good Buckeyes team with one of its top scorers on the shelf won't help them pull out of a nosedive. Ohio State is whole, and it has been playing well at home. In fact, the Buckeyes are 9-0 SU this season, while covering five of the past seven, at home. That includes wins over Duke and Wisconsin. Iowa isn't going to derail this Buckeyes train.