The Illinois Fighting Illini (16-5, 9-2 Big Ten) travel to meet the Indiana Hoosiers (16-5, 7-4) in a Big Ten conference tilt on Saturday at the Simon Skjodt Assembly Hall in Bloomington, Ind. Tip-off is scheduled for 12:00 p.m. ET, and the game can be viewed on ESPN.

The Fighting Illini is coming off an emphatic 80-67 victory against Wisconsin on Wednesday, covering a 6.5-point favorite as the OVER connected. The 80 points were the most in a victory since Jan. 11 at Nebraska. Illinois hit 52% (32-of-62) from the field, and 32% (7-of-22) from behind the 3-point line, while struggling at 50% (9-of-18) from the free-throw line. Kofi Cockburn was literally a one-man wrecking crew, rolling up a game-high 37 points with a sparkling 16-of-19 shooting night. In fact, the rest of his team hit just 37% (16-of-43). Cockburn also racked up 12 rebounds with a blocked shot, adding another notable performance for his Player of the Year resume.

Indiana hit 43% (26-of-60) from the field, while hitting just 30% (6-of-20) from the field. The Hoosiers did a decent job with just 10 turnovers, while outrebounding the Terrapins by a 39-to-36 margin. Race Thompson led the way with 18 points and 12 rebounds, while Trayce Jackson-Davis posted 17 points with nine boards and a blocked shot. When TJD and Thompson are on, they're the straw that stirs the drink for the Hoosiers.

The Fighting Illini has picked up three straight wins since a two-game losing streak against Purdue and at Maryland. The offense was still struggling with a 56-point effort in a win over Michigan State, and 59-point effort in a win at Northwestern. However, Cockburn put the Illini on his back and helped the Illini to its most impressive performance in some time.

The cover against the Badgers snapped an 0-4 ATS skid. As a favorite of six or more points, Illinois is 7-1 ATS in the past eight games. Illinois has also covered in eight of the past 11 games against teams with a winning straight-up record.

For Indiana, they'll have to do without G Rob Phinisee (ankle). He was injured in the Penn State game on Jan. 26. The team didn't really miss him in the win at Maryland, but this is an all-hands on deck situation. 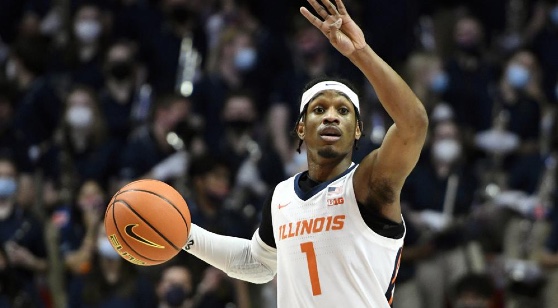 Illinois has won each of the past three meetings in this series, and the Illini is coming off a big victory against Wisconsin last time out. I expect the Illini to use that victory as a springboard into this rivalry game.

Some casual bettors and fans might be surprised to see Indiana sporting an exact win-loss record as Illinois, but that's where we are. However, we've seen a lot of inconsistency out of Indiana, beating a good Purdue team, then losing a mediocre Michigan side by a big margin. Indiana topped Ohio State after a loss to a poor Penn State team. They're a lot harder to figure out than Illinois. I think Cockburn and the visitors come away with the win, and they're a nice value at even-money on the ML.