The Tigers head into Fayetteville with a 19-game win streak in tow, and they look to protect their No. 1 ranking and unbeaten record in the SEC. The Tigers had a near-miss last time out at Georgia on Saturday, scratching out a 74-72 win in Athens as 16-point favorites. Auburn shot just 40% (27-of-68) from behind the field, while going 23% (6-of-26) from behind the 3-point line. Auburn coughed it up 14 times to just 10 times for Georgia, but they made up for that carelessness with the ball by outrebounding the Bulldogs by a 39-to-29 margin.

Arkansas heads into this one with eight straight games dating back to a Jan. 8 loss at Texas A&M. Not only have the Hogs been winning, but they have covered seven of those outings, including each of the past four. If you're looking at recent common opponents, Arkansas just spanked Georgia on Feb. 2 by a 99-73 score in Athens. Last time out, Arkansas topped Mississippi State 63-55, and the Razorbacks hit just 38% (23-of-61) from the field, while managing just 21% (4-of-19) from behind the 3-point line. The difference was that Arkansas turned it over just five times, while outrebounding Mississippi State 36-33.

The Tigers had covered eight consecutive games from Dec. 22-Jan. 22, but they're just 2-2 ATS across the past four outings while also splitting the OVER/UNDER 2-2 during the span. In the games it hasn't covered, Auburn has also hit the UNDER during the past four contest.

Auburn has posted a 13-3 ATS mark across the past 16 games against teams with a winning overall record, while going 19-7 ATS in the past 26 games overall. The Tigers are also 23-8-1 ATS in the past 32 games following a straight-up win, while cashing in five of the past seven following a non-cover.

In terms of the total, the UNDER is 5-2-1 in the past eight at home against teams with a winning overall road mark.

The Razorbacks have won each of the past two meetings in this series, and six of the past 10 games overall. Auburn does hold a 3-1 ATS advantage in the past four meetings, with the UNDER holding a slight 4-3 edge in the previous seven battles. 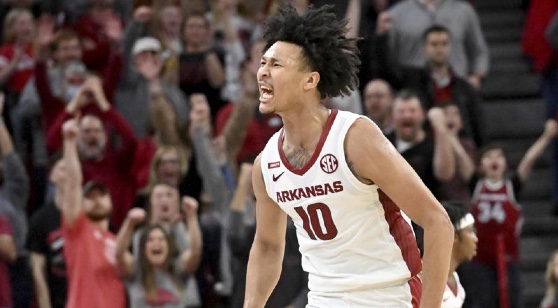 Arkansas has covered each of its past four games overall. (AP)

INSIDE THE STATS - ARKANSAS RAZORBACKS

The Auburn Tigers were very fortunate to get it done on the road against a bad Georgia team, winning by two points. The top-ranked team in The Associated Press' Top 25 poll nearly suffered a monumental loss. It got the win, but the Tigers won't be as fortunate against the red-hot Razorbacks.

Auburn might be missing a bench piece, too, as Zep Jasper is dealing with an undisclosed injury and is a question mark for Tuesday's contest. Whether he plays or not won't change much, but a lack of depth is not what the Tigers need against a team playing very well. Auburn needs all hands on deck for its toughest road test since the Alabama game on Jan. 11. Bruce Pearl's team will see its luck run out, and Arkansas plays its way up the rankings heading into the new week. Arkansas is 7-1 ATS in the past eight games overall, and on an eight-game win streak. They'll extend both of those streaks on Tuesday.