The Ohio State Buckeyes (14-5, 7-3 Big Ten) travel to meet the Rutgers Scarlet Knights (13-9, 7-5) for a Big Ten conference matchup at Jersey Mike's Arena in Piscataway, N.J. on Wednesday. Tip-off is scheduled for 7:00 p.m. ET, and the game can be viewed on Big Ten Network.

The Buckeyes rebounded from an 81-78 loss at Purdue on Jan. 30 with an 82-67 victory over Maryland in Columbus last time out. The ranked Buckeyes have won four of the past five games while covering each of the past four outings. The 82 points scored were the most in nearly a calendar month since dropping 95 on Northwestern on Jan. 9. Ohio State hit 51% (30-of-59) from the field, including 42% (11-of-26) from downtown, while turning the ball over just six times. Ohio State also outrebounded Maryland by a 35-to-29 margin. E.J. Liddell led the way with 24 points and 11 rebounds, while shooting an efficient 9-of-14 from the field.

While the Scarlet Knights have managed a record of just four games over .500, they're a pain every night out for opponents. Just ask Michigan State, as the ranked Spartans left New Jersey with an 84-63 loss last time out against Rutgers. Before that win over Sparty, Rutgers had each of the previous five outings separated by single digits. Rutgers has covered the past two games, and they're looking to equal a season best with three straight covers, tying a 3-0 ATS run from Jan. 1-8. Rutgers was ridiculous with 62% (32-of-52) field goals made, including 45% (9-of-20) from behind the 3-point line.

Ohio State has won four straight in this series, too, while going 4-0 ATS, while cashing the OVER in each outing. Ohio State is also 6-1 SU/ATS across the past seven outings, while Rutgers has won just once in the past four home games against Ohio State.

The home team has connected in five of the past six meetings in this series, while the favorite is 5-2 ATS in the past seven meetings. 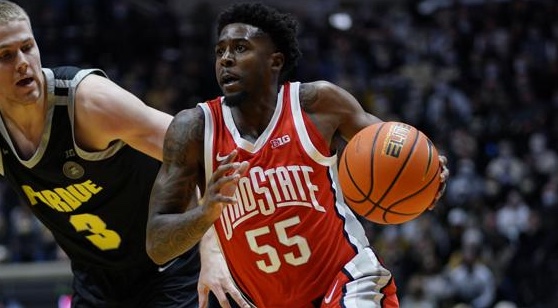 INSIDE THE STATS - RUTGERS SCARLET KNIGHTS

The Michigan State-Rutgers game should serve as a cautionary tale for Ohio State heading into this one. Yes, Rutgers is barely above .500, but they bring the energy every night and you simply cannot let your guard down or you might get boat-raced by Ron Harper, Jr., Geo Baker etc.

The Buckeyes are playing its best basketball of the season, peaking in February for a stretch run into the Big Ten Tournament and what they hope is a deep run into the NCAA Tournament, too. Ohio State has a big man in Liddell who can be a difference maker in this game, and Ohio State should be able to do enough in the frontcourt to avoid the upset at Rutgers. But this game is going to come down to the end, and free throws and turnovers are likely to make the difference.