The Cougars are in freefall, losing three consecutive games. There's not a lot of shame losing to the likes of Arizona and Oregon, but the Arizona State loss certainly hurt. The Cougars are coming off a 62-59 loss to the Ducks, but at least Wazzu picked up the cover in that game. Defense has been good for Washington State, allowing 64 or fewer points in nine of the past 10 games.

UCLA is looking to bounce back after a 67-64 loss at USC on Feb. 12 as 4.5-point favorites. The Bruins have stumbled across the past four games, going 1-3 SU/ATS. Star Johnny Juzang ended up going just 4-of-16 from the field, finishing with 12 points, five rebounds, two steals and a blocked shot in his 37 minutes. He was one of only two scorers in double digits. Jaime Jaquez Jr. also hit just 2-of-11 from the field to finish with five points, too, as UCLA just didn't have it against its crosstown rivals.

Washington State snapped an 0-3 ATS skid with the cover against Oregon, but they're still on a three-game losing streak overall. The offense has tanked during the losing streak, averaging just 58.0 PPG, which is over 13 points lower than the team's season average. The Cougars have started to lock it down on offense, however, allowing 62 or fewer points in eight of the past 10 games.

UCLA is looking for revenge after losing to Washington State in Pullman in the most recent matchup in this series, an 81-73 loss Feb. 11, 2021 as the Cougars won outright as a 3.5-point underdog. UCLA has won just two of the past four meetings, while going 1-3 ATS in the span. The Bruins have won seven of the past nine meetings overall, although Washington State owns a 5-4 ATS record during that stretch. 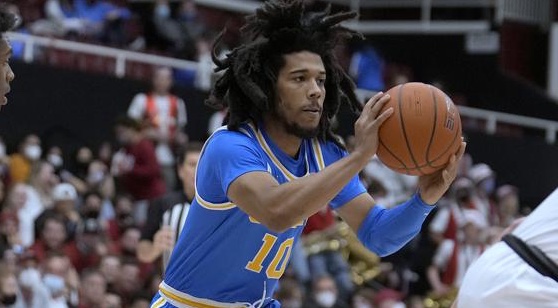 INSIDE THE STATS - WASHINGTON STATE COUGARS

Washington State is skidding, while UCLA has fallen off the pace which had them sitting in the Top 5 of the rankings and a sure-fire team for the one-line in the NCAA Tournament. The Bruins need to get back to the basics and just start shooting the basketball better. They've been way too inconsistent.

Bernard, Jaquez and Juzang should be able to get back on track against a Washington State team with 10 losses, but the Cougars do have a very good defense, so it might be a tough go, at least initially. Look for the Cougars to hold down the Bruins in the first half before UCLA starts to pull away somewhat. However, Washington State should do enough defensively to keep it within single digits.