The Spiders picked up a 77-63 victory last time out against La Salle, narrowly earning the cover as a 13.5-point favorite as the UNDER connected. Richmond is averaging 80.5 PPG across the past two outings, and the Spiders got a very balanced performance against the Explorers. Richmond had five scorers with 11 or more points, with Tyler Burton tying a team high with 15 points while posting 10 rebounds and a blocked shot.

The Rams enter on a four-game win streak, including a road win last time out at Fordham by a 66-61 score as a 10-point favorite. The OVER still managed to come in, hitting in each of the past five games overall. VCU picked up a 64-62 road win at Richmond in the most recent meeting Jan. 29, cashing as a 2.5-point underdog as the UNDER cashed. Vince Williams, Jr. went for 22 points, 10 rebounds, eight assist and two blocked shots with a steal, and he was joined in the double-double club by Hason Ward, who had 14 points and 10 boards in just 25 minutes.

Richmond has won four of the past five games overall while going 3-2 ATS during the span. Defense has been the secret of their success lately, allowing 64 or fewer points in seven of the past eight outings. It's no surprise that the UNDER is also 7-1 in the eight-game span, too.

VCU has won five of the past six meetings, and seven of the previous 10 in this rivalry, with the Rams holding a 6-4 ATS lead during the span. The last time these teams met, it was fairly even, with the Rams coming out on top, 64-62. The rebounding margin was dead-even at 34, and it was the second time in the past three games that these teams actually had the same amount of boards against each other. That's how evenly matches these teams usually are. 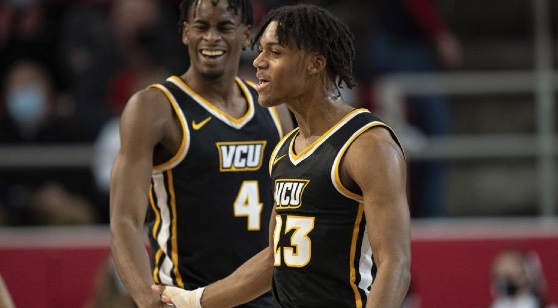 The OVER has cashed in each of the past five games for VCU. (AP)

INSIDE THE STATS - RICHMOND SPIDERS

INSIDE THE STATS - VCU RAMS

These A-10 rivals have been evenly matched for most of the past decade, but the Rams have been just slightly better. That was on clear display the last time these teams met, with the Rams scratching out a win by shooting 51% (28-of-55) despite turning it over 18 times with 20 personal fouls and a 57% (4-of-7) mark from the free-throw line. The Spiders were just 35% (22-of-62) from the field, and 18% (4-of-22) from behind the arc, but stayed in the game with five less turnovers and 12 steals.

For whatever reason for Richmond, it just cannot get over the hump against VCU. I expect this to be another close game, with the Spiders finding a way to somehow snatch defeat from the jaws of victory. The Rams just seem to have their number, and VCU will grab another win in this key battle in the A-10, as it stays within hailing distance of Davidson for the conference title.