Illinois is looking for the bounce-back after suffering a 70-59 loss at Rutgers on Wednesday, failing to cover as a four-point favorite as the UNDER connected. It's the third time in the past seven games Illinois has scored 59 or fewer points, which is inexplicable considering it has one of the best offensive weapons in the country in Kofi Cockburn.

For Michigan State, it has revenge on its mind after a 56-55 loss at Illinois back on Jan. 25, although the Spartans did cover as a two-point underdog. The 56 points allowed to Illinois was the lowest total of the season for the Illini, although they did end up winning. Michigan State has dropped three of the past four games overall, while going 1-4 ATS across the past five outings. Sparty needs to turn it around immediately.

The Fighting Illini are still just a half-game off the pace for first place in the Big Ten, tied with Wisconsin at 11-4, behind Purdue. They're also one game clear of Ohio State, although the Buckeyes have two games in hand.

For totals, the UNDER is 5-2 in the past seven games overall, with the low-scoring run starting Jan. 25 in the 56-55 win over Michigan State on Jan. 25. The UNDER is also 18-8 in the previous 26 for Illinois when facing a team with a winning overall record, while going 4-1 in the past five following an ATS loss.

Michigan State is looking to get untracked after a disappointing 62-58 loss at Penn State. The 58 points tied the second-lowest offensive output of the season, with the 55 scored against Illinois on Jan. 25 as the low point. 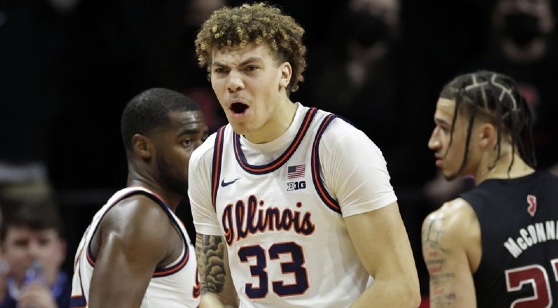 Illinois has covered just one of its past six games on the road. (AP)

Confidence isn't terribly high for either of these sides, as far as bettors are concerned. Illinois was dusted at Rutgers last time out, and Michigan State fell to lowly Penn State. The difference here will be venue, and it will be Sparty exactly a little revenge in another super close matchup with a low score.