The Oregon Ducks are coming off a bad loss to the Arizona State Sun Devils 81-57 this past Thursday night. The Ducks shot the ball horribly, shooting 34.5% from the field and 19.2% from beyond the arc. Oregon was also out rebounded 40-29 and only had nine assists throughout the game. With a 10-5 conference record, the Ducks are currently in fourth place in the Pac-12.

The third ranked Arizona Wildcats defeated the Oregon State Beavers on Thursday night. The Wildcats shot just 22% from three, but managed to shoot 52.5% from the field, and had a whopping 26 assists. Arizona was also able to win the rebounding battle 42-32, and held the Beavers to 39.1% shooting from the field. The Wildcats are atop the PAC-12 with a 13-1 conference record.

The Wildcats have been dominant all season, with their only losses coming from UCLA and Tennessee. Oregon has had a few bad games, including their most recent, but also beat UCLA and USC in back-to-back road games earlier in the season. My immediate reaction to this game was an easy Arizona cover, but this Ducks team has proved they can play with the top teams in the Pac-12. They have also had success against Arizona in the past, most recently being an 80-69 victory in March of 2021. For these reasons I like the Ducks and the points in this one.

Arizona has been profitable for bettors with a 14-9-2 ATS record. The Wildcats have gone 2-2-1 ATS in their last five games. In their last five games when playing at home against Oregon, Arizona is 0-5 ATS. The total has gone under in 13 of the Wildcats 25 games including nine of their last 12. Going against the recent trend, the total has gone over in nine of the last 12 games played against Oregon.

The Wildcat's offense has been on a roll all season, averaging 84.8 PPG (3rd), 48.9 FG% (9th), 33.7 3PT% (190th), 20.3 APG (1st), and 43.5 RPG (1st). Sophomore guard Bennedict Mathurin has been great for Arizona, averaging 17.2 PPG, 5.8 RPG, and 2.2 APG. In addition to Bennedict, the Wildcats have two seven-foot centers, Christian Koloko and Oumar Ballo, who have made playing man-to-man an absolute nightmare for teams. Expect the Wildcats to stick to their normal gameplan of working the ball inside, whether it be off the bounce or feeding it to one of the big men. 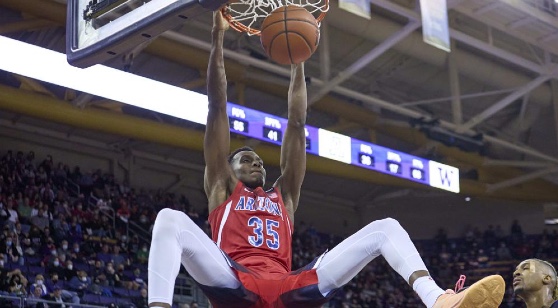 Arizona is 5-2 ATS in the past seven games against winning teams. (AP)

INSIDE THE STATS - OREGON DUCKS

This will be a tough game for Oregon to win outright. They will need to shoot the ball well and manage Arizona’s size down low. However, the Ducks have shown strength on the road this season with back-to-back road wins against UCLA and USC. I really do not see Oregon winning, but think they put up a fight and keep it within a ten-point loss. Backing Oregon and the points in a hard-fought road game.