The Volunteers had some hiccups in the month of January, but ever since flipping the calendar to February they've been on point. Tennessee is a perfect 5-0 SU in February, including a rousing 76-63 win over Kentucky in a battle of ranked rivals in Knoxville. Tennessee shot 44% (24-of-54) from the field, including 6-of-12 from Santiago Vescovi, who ended up with 18 points with four rebounds, two assists, a steal and a blocked shot in his 35 minutes. Three others contributed at least 14 points, with Kennedy Chandler dumping in three triples.

The Razorbacks have rattled off wins in 10 of the past 11 games, while cashing in seven consecutive outings. They're also 10-1 ATS in the previous 11 outings. The only setback was a 68-67 loss at Alabama, and the only non-cover was a 76-73 win in overtime against Texas A&M on Jan. 22.

Tennessee has owned this series of late, winning four of the past five while covering three of those outings. That includes a 79-74 win over Arkansas at Thompson-Boling Arena in Knoxville on Jan. 6, 2021, although the Hogs did grab the cover there. Tennessee owns a 4-2 ATS edge in the previous six meetings, while the OVER has cashed in seven straight in this series.

The Volunteers have won five in a row while covering three of the previous four outings. On the road, Tennessee has won three straight conference games, while going 4-0 ATS in the past four road outings overall.

The Razorbacks are shooting for their eight consecutive cover, and they're 5-1 ATS across the past six games at home dating back to Jan. 4. Arkansas has cashed in each of the past five games as a favorite, while going 4-1 ATS in the past five as a home fave. 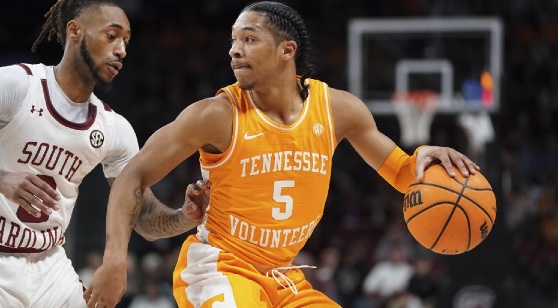 The Volunteers have picked up covers in each of the past four games on the road. (AP)

INSIDE THE STATS - ARKANSAS RAZORBACKS

While I like what I've seen from Arkansas, especially against the number, I think Tennessee is just a little more battle tested and ready to pick up the road win. The Vols will use the last game, an emotional win over rival Kentucky, as a springboard into this one to secure their 20th victory of the season.

These are two teams headed for the NCAA Tournament, with Sweet Sixteen quality, and perhaps a little more, and it wouldn't be surprising to see these teams squaring off for a bigger prize in the SEC Tournament, too. The Razorbacks are 10-1 ATS in the past 11 games, true, but that only means that they're due to have a stinker. What better time for an impressive streak to end than against a tough team playing very good basketball?