Texas Tech is riding high heading into this one, coming off back-to-back victories at home against TCU and Baylor by 10 or more points. The Red Raiders covered each of the past two while hitting the OVER, too. The Red Raiders hit 46% (26-of-56) from the field, with four players going for 14 or more points. Kevin Obanor was the high man with 23 points, while also grabbing 13 rebounds to go along with a blocked shot and four triples. The Red Raiders turned it over just 13 times while outrebounding Baylor by a 39-to-29 clip.

The Longhorns were drummed at Baylor by an 80-63 count on Feb. 12, but they bounced back for a solid gut-check 80-78 overtime win at Oklahoma, moving to 8-5 in the Big 12 rather than fall to 7-6. That keeps Texas alive in the hunt for the regular-season conference title, although it still has quite a bit of work to do. It can reel in Texas Tech with a victory, however. Last time Texas tried its hand against Texas Tech, it ended in a 77-64 loss in Lubbock on Feb. 1 as the OVER connected.

The Red Raiders hit the hardwood with Kevin McCullar (ankle) still a question mark to play due to an ankle injury which has sidelined him since stepping on a coaches' foot in the win against TCU on Feb. 12. He missed the Baylor game, but the Red Raiders soldiered on for an 83-73 victory. Depth could be tested, too, as bench players G Sardaar Calhoun (quarantine) and F KJ Allen (undisclosed) are also question marks.

For totals, the UNDER has connected in six of the past seven road games, while going 6-1 in the past seven on the road against teams with a winning home record.

Texas heads into this one with just one win in the past four meetings with Texas Tech, including a 13-point curb-stomping at United Supermarkets Arena in Lubbock on Feb. 1 as the OVER connected. The Longhorns have certainly had their difficulties with the Red Raiders, going 1-3 ATS in the past four meetings, and 2-6 ATS across the previous eight encounters.

Texas has cashed just twice against the number in the past seven outings after a straight-up win, while going 1-4 ATS in the past five following a cover. The Longhorns are also 1-5 ATS in the past six games played on a Saturday, for whatever that's worth.

For totals, the OVER has connected in four of the past five outings for Texas, which is surprisingly considering its defensive prowess. The UNDER has cashed in 12 of the past 17 games at home, however, while going 4-1 in the past five as a home favorite. 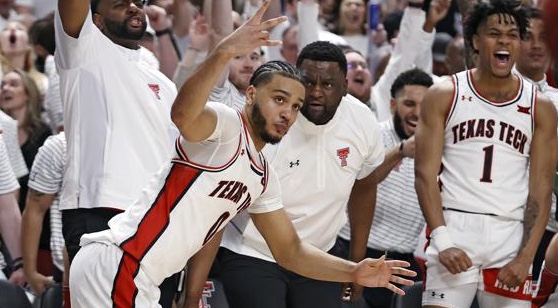 Texas Tech has covered six of the previous eight meetings vs. Texas. (AP)

The Longhorns are a very good defensive team, in fact they're one of the best in the nation. But the Red Raiders showed they can bust that defense and put up plenty of points when needed. Now, can they do it on the road? That's the big question, but Texas Tech didn't seem to have issues at West Virginia on Feb. 5. The Red Raider are 4-2 ATS in six true road games, and they covered against the Longhorns at home. They're the play in Saturday's game, although the potential absence of McCullar concerns me, so go lightly.