The Musketeers are in a bit of a swoon lately, coming off a 13-point beatdown at the hands of the St. John's Red Storm. In addition to that 86-73 setback, Xavier has lost three of its past four games overall, while going just 3-8 ATS in the previous 11 games.

Offense hasn't really been an issue for Xavier, scoring 71 or more points in each of the past three, but defensively it has had lapses, including a season-high 86 points allowed last time out against SJU.

The one win Xavier has in the past four games, however, came against UConn on Feb. 11 at Cintas Center in Cincinnati, covering a one-point number as the OVER hit. UConn bounced back with a pair of wins, but it hasn't covered in three outings, while the Huskies are 1-6 ATS across the past seven contests overall.

The Musketeers have dropped three of the past four games, while going 2-3 ATS across the five games overall. After opening the season 9-2 ATS, Xavier has struggled mightily against the number with a 4-10 ATS mark across the past 14 games overall. However, one of those covers, in fact the most recent win and cover, was against UConn on Feb. 11.

For the Musketeers, the OVER is 4-1 in the past five games overall, but the UNDER is just 5-1 in the past six following a non-cover.

One thing to pay close attention to is the health of Nate Johnson (knee), who hasn't played since the UConn win Feb. 11 due to a knee issue. He is questionable to play Saturday. Johnson is the fourth-highest scorer with 9.8 PPG, while posting 2.6 RPG, 1.0 APG and a 39.4 3P%, which actually leads the team.

In this series, we've had three meetings since Nov. 22, 2019, with Xavier holding a 2-1 SU edge, with UConn going 2-1 ATS. The OVER has connected in each of the previous three meetings, too. 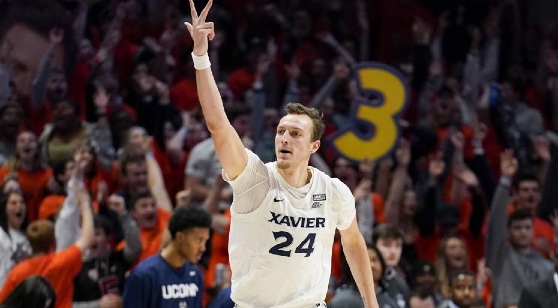 The Musketeers have covered just three of the past 11 games overall. (AP)

While yes, Xavier topped UConn the last time these teams faced, and very recently at that, I just don't trust the Musketeers hitting the road. They're 1-2 SU in the past three road outings, while going just 3-3 ATS in the past six road outings inside the conference. I'd feel a little better about Xavier if they were full strength, too, but missing Johnson is a lot of offense that it simply cannot afford to have in street clothes.

UConn is back at Gampel Pavilion, and it will have the revenge factor, too, looking to atone for a 74-68 loss at Xavier, its most recent setback, on Feb. 11. UConn can also ill-afford to lose a ninth game, as they're already looking at a low seed if it qualifies for the NCAA Tournament, and more losses to similar teams could mean the ninth or 10th line for March Madness, should it qualify. UConn needs some quality wins, and it will get one here.