Marquette won their most recent game against Georgetown 77-66. The Golden Eagles played excellent defense, holding the Hoyas to just 33% shooting from three and 29% from the field. Freshman guard Kam Jones had a career high of 19 points, 17 of them coming in the first half. The win snapped the Golden Eagle’s two game losing streak and are currently fifth in the Big-East with a 9-6 conference record.

The Creighton Bluejays are coming off a 71-59 road win against DePaul. Senior forward Ryan Hawkins was great for the Bluejays putting up 25 points and 11 rebounds, making it his third straight game posting a double double. Creighton has now won four straight and five of their last six games. The Bluejays fourth in the Big-East with a 9-5 conference record.

This will be the second meeting of the season between these teams. The first meeting ended with Creighton winning 75-69 in double overtime. The difference maker was rebounding and shooting from three. The Bluejays won the rebounding battle 54-44, and shot 35% from three compared to 26% by Marquette. 14 of the last 15 games between the two have been decided by eight points or less, with Creighton winning five of the last six. I think this one ends as another close game, but I expect the Golden Eagles to shoot better than they did in the first matchup. Backing the Golden Eagles at +2 here.

The Golden Eagles have been profitable on the year, posting a 15-11 ATS record including 6-3 on the road. Marquette is 9-3 ATS in their last 12 and have gone 8-4 ATS in their last 12 games against Creighton. The total has gone under in six of the Golden Eagles last nine games. Going against this trend, the total has gone over in the last five games when Marquette is playing on the road against Creighton.

The Golden Eagles defense has played pretty well throughout the year, most notably only allowing 64 PPG during a seven-game winning streak earlier in the year. On the season, Marquette has allowed 69.8 PPG (201st), 40.1 FG% (32nd), 32 3PT% (101st), while averaging 7.9 SPG (65th), and 5.2 BPG (17th). The Golden Eagles were able to grab nine steals and force 16 total turnovers in the first matchup against Creighton, as well as hold them to 36% shooting from the field.

Creighton has posted a .500 record ATS going 12-12-1. The Bluejays are 4-1 SU and 2-3 ATS in their last five games. The total has gone under in five of Creighton’s last seven games but has gone over in the last five games when playing Marquette at home.

Creighton’s defense has allowed just 63.5 PPG during their four-game winning streak. Throughout the entire season the Bluejays are allowing 65.7 PPG (80th), 39 FG% (17th), 32.2 3PT% (121st), while averaging 5.4 SPG (290th), and 4.6 BPG (43rd). The Bluejays played excellent defense in their first matchup against Marquette. However, they could do a better job of creating more turnovers as the Golden Eagles only had 11 compared to Creighton’s 16. 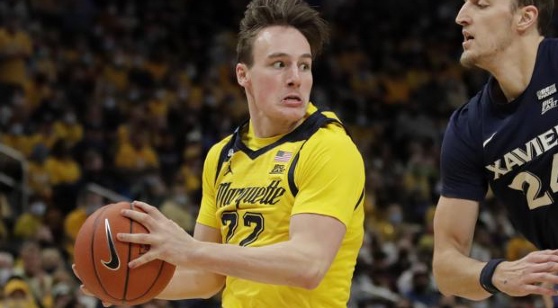 Marquette has covered the spread in six of its last nine road games. (AP)

I like Marquette in this one but not by much. The Golden Eagles have been solid covering on the road this season (6-3 ATS) while Creighton has not been good covering at home (4-7-1 ATS). Expect a close game that comes down to the wire as both teams are very evenly matched. I like the Golden Eagles and the points here in a revenge game.