The Bears bounced back nicely with a 72-62 victory over TCU last time out on Saturday, pushing at most shops at the UNDER connected. It was a nice bounce-back game after an 83-73 loss at Texas Tech last time out on Wednesday. The Bears are 2-1-1 ATS in the previous four outings. L.J. Cryer (foot) was back out of the lineup Saturday, and now Adam Flagler (knee) is a question mark for this one, too, after missing the TCU game. In fact, the Bears used just the five starters and two bench players.

The Cowboys have alternated wins and losses in each of the past six games, going 1-3 ATS across the past four outings overall. Oklahoma State is 3-6 SU across the past nine outings, too, as they're in freefall in the conference standings after a fair start. Oklahoma State did pick up an 82-79 win in overtime against Kansas State last time out, however, and the 82 points scored were the most since dropping 98 points in an overtime win over Cleveland State back on Dec. 13.

Baylor posted a 72-62 win over TCU to push against the number at most shops. It is now 2-1-1 ATS across the past four games after a 0-3 ATS skid from Jan. 29-Feb. 5, which included a pair of straight-up losses.

The Bears are a bit banged up, with Cryer and Flagler, two of their top three scorers, nursing injuries, so James Akinjo is forced to do most of the heavy lifting. Baylor was able to take care of business at home against a good TCU team, but hitting the road will be a tall order, even against a .500 team in Stillwater.

Oklahoma State protected its home court in an OT win over K-State last time out, but it failed to cover the 4.5-point number as favorites. OK State is 4-2 SU across the past six at home, however, but 3-7 ATS in the past 10 games at home. 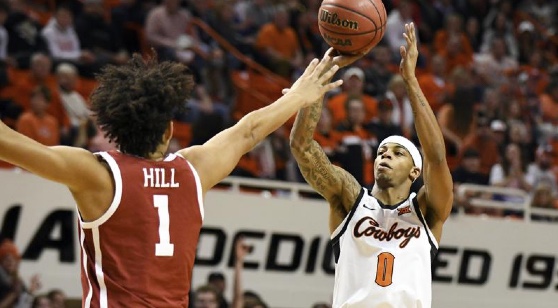 The underdog has connected in four of the past five meetings between Baylor and OK State. (AP)

INSIDE THE STATS - OKLAHOMA STATE COWBOYS

The Bears limp into this game with Cryer and Flagler as huge question marks. That makes it difficult to predict what is going to happen, although Baylor certainly was able to handle itself with aplomb in a shorthanded situation against TCU last time out. But playing at home, and playing on the road are totally different animals.

The Cowboys haven't been terribly good, either at home or on the road, but Oklahoma State was able to get it done against Kansas State last time out. Still, they're just .500, and not one of the strongest units in the Big 12. Oklahoma State is getting a gift with Baylor entering in a shorthanded situation, but even the Bears reserves should be able to outpace the Cowboys.