Game 4 of the NLDS sees the San Francisco Giants visit the Los Angeles Dodgers as the NL West champions are one win away from bouncing last season's World Series champions. Opening pitch is set for 9:37 p.m. ET and will air on TBS from Dodger Stadium in Los Angeles, California.

Defense and pitching were the story of Game 4 between the San Francisco Giants and Los Angeles Dodgers. The two best offenses in the National League during the regular season were shut down, combining for just eight hits and one run.

There were some spectacular defensive plays, highlighted by Brandon Crawford’s snag to deny Mookie Betts an RBI and give the Giants a 1-0 win. 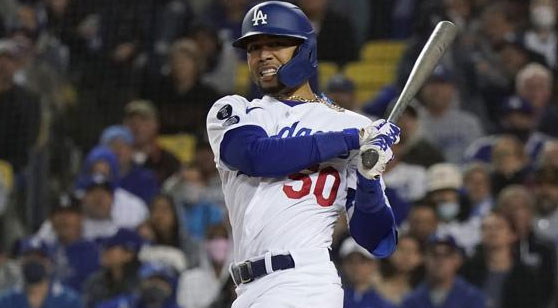 Mookie Betts and the Dodgers have been shut out twice in the NLDS by the Giants. (AP)

Anthony DeSclafani will be the Game 4 starter for the Giants. DeSclafani went 13-7 with a 1.09 WHIP and a 3.17 ERA during the regular season to be one of the top pitchers in the National League. This will be DeSclafani’s playoff debut, as he didn’t pitch in the postseason during his six seasons with Miami and Cincinnati.

The 31-year-old right hander was rocked by the Dodgers in his six starts against this team. DeSclafani posted a 7.33 ERA in 27 innings, as the L.A. batters hit .300 against him. His last start against the Dodgers went well, but he was rocked for 10 earned runs in his first outing against L.A. and gave up multiple runs in five of his starts.

San Francisco has had two batters hit the ball extremely well in this series. Long-time catcher Buster Posey has been the most dangerous hitter with five hits and a 1.167 OPS through the first three games. Midseason acquisition Kris Bryant has also shined with four hits and a 1.100 OPS.

The only other Giants’ hitter with multiple hits in this series is Brandon Crawford. Everyone else that came through in the regular season has struggled, yet San Francisco holds a 2-1 series lead.

It will be interesting to see who Roberts gives the ball to on Tuesday night. Tony Gonsolin would have been the likely Game 4 starter if the Dodgers won on Monday, but that might change with the World Series champions in a must-win situation.

Gonsolin will probably see some action even if he doesn’t get the start. He was 4-1 as a starter this year, boasting a 3.23 ERA, but he walked too many batters to go deep into games. His 34 walks through 55.2 innings heavily contributed to a 1.35 WHIP.

Will Smith has been one of the Dodgers’ best hitters this postseason. Smith has a 1.164 OPS through four games, and he already has reached base five times against the Giants. Other hitters will come through for Los Angeles to force a Game 5 though.

Mookie Betts had five hits in L.A.’s first three games before going 0-4 in Game 3. Betts is unlikely to go hitless again, while Justin Turner and Trea Turner are both due to start hitting. Corey Seager should see more production too, as he was the Dodgers’ best bat in the regular season.