The Major League Baseball season is finally going to start in two weeks when the Washington Nationals host the New York Yankees on July 23rd. Before COVID-19 postponed the beginning of the MLB season in March, various sportsbooks had win total bets for each of the 30 MLB teams. While I had my own picks for the originally scheduled 162-game season, I must throw out all that analysis because this shortened season is going to be radically different.

Not only will each team play only 60 games this year, but who they will play will be much different. Over the 60-game season, each team will play 40 games against their own division, and then the remaining 20 games against interleague teams from the same region.

What does this mean for AL Central and NL Central teams? Every one of those teams is going to have a weaker schedule than during the originally scheduled 162-game season. The other radical change is that National League teams will have a designated hitter for the first time. The result of both changes mean that National League lineups are going to be radically different, and teams in competitive divisions will be at a larger competitive disadvantage than usual. 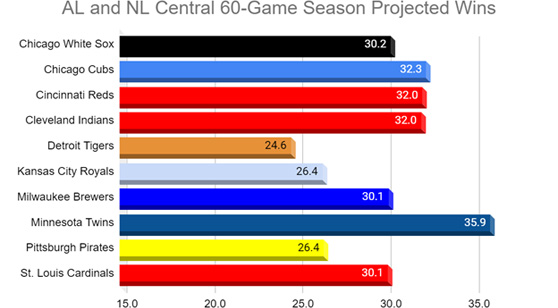 When you add up the win total numbers for all 10 AL Central and NL Central teams, the number of wins equals 296. This is mathematically impossible if all 10 teams play the full schedule of 60 games each because during the 2020 regular season, each team will only play teams in their region. This means that the total number of wins and losses for all 10 teams is going to equal 300 wins.

With the average AL and NL Central win total number being set too low, there is more value in betting 'overs' than 'unders'. This is unlike the AL and NL West where the combined number of wins according to the win total numbers equals 308.5 and the AL and NL East where it equals 307. In both of those regions East and West, the total combined number of wins is going to be 300, so for those regions the under is a better valued bet than the 'over'. For the central region this is not the case as the over is a better bet than the 'under'.

My favorite win total bet for both the AL and NL Central, is to bet that the Kansas City Royals will win over 23.5 wins. A 24-36 win season would translate to a 40% winning percentage. For a traditional 162-game MLB season, a 40% winning percentage would translate to a 65-97 record. Last year, Royals were dreadful as they finished the season with a 59-103 record. The reason why I think Kansas City will perform better this season is because of two factors. The first factor is for this year’s 60-game season, the Royals will play 66.7% of their games against the AL Central which is arguably the weakest division in the MLB.

In a 162-game regular season, the Royals would play 46.9% of their games against the other AL Central teams. This means that the Royals will avoid playing the Yankees, Astros, Rays, and Angels which can only improve their winning percentage. The other factor that favors the Royals winning more than 23.5 games is that they are a young team whose players are going to get better as opposed to worse.

While I am betting on the Royals winning more than 23.5 games, by no means do I think that they will be any good this year. Among all 30 MLB teams, my model projects the Royals to have the 6th lowest number of wins. This is not the Kansas City team that won the 2015 World Series. However, for the win total bet to cash, the Royals need to win only 40% of their games (24 wins), and my model projects the Royals to win 44% of their gamers (26.4 wins). Among the Royals' lineup, my model predicts that they are going to rank 24th out of all 30 MLB teams in runs scored. What is preventing the Royals from being even worse is their designated hitter Jorge Soler.

Soler had a breakout season for the Royals last year as he had 48 home runs, 117 RBI’s, and a wRC+ of 136. Soler seemingly came out of nowhere last year as his previous season high in home runs was only 12. While Soler may not be able to replicate last year’s performance, my model projects the slugger to have another solid season in 2020 as he is only 28-years old.

As far as the Royals pitching is concerned, they are projected to give up the 5th most runs out of all 30 MLB teams. The Royals bullpen and starting rotation are projected to be consistently mediocre this season. One reason for this is that of their five starting pitchers, their projected FIP’s range from 4.43 to 4.57. While the Royals rotation does not have a clear ace, they do not have a clear disaster waiting to happen either. On any given day one of those starters can randomly have a quality start and the Royals lineup could give them enough run support to get a surprise win. That and Soler is the reason why I am betting on the Royals winning more than 23.5 wins.

The $30 million question for the 2020 Detroit Tigers is, is this year's team worse than the 2019 edition? The reason why it is a $30 million question is because that is what they are paying the ancient injury prone Miguel Cabrera per year for the next 3 years. The 2019 squad was so bad, that they had the worst record in the league with a 47-114 record. However, I believe that last season was a low water mark, and in order for the Tigers to win 20 or fewer games this season they would have to win less than 35% of their games. Based on a few minor changes that the Tigers made this offseason, I am betting that the Tigers will win more than 20.5 games.

One reason why I believe Detroit is going to win more than 20.5 games this year is that their lineup will benefit from the free agent acquisitions of 1B C.J. Cron and 2B Jonathan Schoop. Both Cron and Schoop signed this offseason for one-year $6.1 million contracts, meaning that they both have an incentive to perform well this year so they can get better contracts next offseason. When you factor in Detroit’s infield of Cron, Schoop, SS Niko Goodrum, and 3B Jeimer Candelario, every one of those players is projected to be either average or above average offensively.

On the other hand, the rest of the lineup excluding Cabrera is projected to perform below average offensively. The one x-factor for the Tigers is Cabrera. While Cabrera has been besieged with injuries over the last 2 seasons, he is reportedly in good physical shape. With a 60-game season causing less stress on his body, I think we see a Cabrera that is closer to his 2-time MVP form than the one of last season that had a -0.1 WAR. That is one of the reasons why I am betting on the Tigers winning more than 20.5 games this season.

While the Tigers have an underrated lineup, their pitching staff is a dumpster fire. Out of all 30 MLB teams, only 2 teams are projected to have worse bullpens than Detroit. Typically, you can avoid having to rely on your bullpen with quality starting pitching, they do not have that luxury. The Tigers starting rotation is a combination of inexperienced and past their prime pitchers. The pitcher most emblematic of the veterans on their staff is Jordan Zimmermann who was 1-13 with a 6.91 ERA last season.

Luckily for the Tigers, they have plenty of young pitching talent waiting in the wings including 2018 first overall pick Casey Mize. Detroit's pitching might be bad, but I don’t think they are bad enough to lose at least 2/3rds of their games this season. That combined with their hitting is why I am betting on the Tigers winning more than 20.5 games this season.