In the less than two weeks, the 2020 Major League Baseball season is finally going to start. Before COVID-19 postponed the beginning of the MLB season in March, various sportsbooks had win total bets for each of the 30 MLB teams.

With a 60-game season, the win total numbers have been adjusted from the original numbers that were released for the originally scheduled 162-game season. Not only will each team play only 60 games this year, but who they will play will be much different.

Over the 60-game season, each team will play 40 games against their own division, and then the remaining 20 games against interleague teams from the same region.

What does this mean for AL West and NL West teams? Every one of those teams is going to have a much tougher schedule than during the originally scheduled 162-game season. The other radical change is that National League teams will have a designated hitter for the first time. 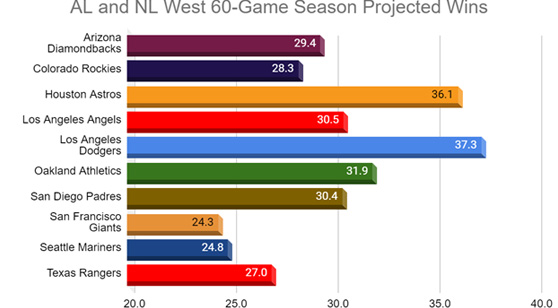 When you add up the win total numbers for all 10 AL West and NL West teams, the number of wins equals 308.5. This is mathematically impossible if all 10 teams play a full schedule of 60 games each because during the 2020 regular season, each team will only play teams in their region. This means that the total number of wins and losses for all 10 teams combined is going to equal 300 wins.

My favorite win total bet for both the AL and NL West, is to bet that the Texas Rangers will win fewer than 29.5 wins. For the Rangers to go over 29.5 wins, they would have to finish the 2020 season with a .500 record on better. Over the last three seasons, the Rangers have had a losing record each year. Last year, Texas had a 78-84 record. Are the Rangers a better team this year?

Despite being active this offseason, the Rangers are not a better team. Additionally, the club has a tougher schedule and for that reason, I am betting on the Texas Rangers to win fewer than 29.5 games.

When you factor in the NL West teams that they are playing, the only games in which the Rangers play worse teams are the games that they will play against the San Francisco Giants and the Seattle Mariners.

However, only 21.7% of the Rangers games are against San Francisco and Seattle this season, the rest of their schedule are against teams that are either just as good or better than them. Without being able to play the Baltimore Orioles, Kansas City Royals, or Detroit Tigers I have a hard time seeing how the Rangers can be a winning baseball team this season.

While I am betting on the Rangers winning fewer than 29.5 games, I do have to acknowledge some of their powerful offensive weapons. The team does have OF Joey Gallo, OF Willie Calhoun, DH Shin-Choo Cho, and 3B Nick Solak. Solak is a 2nd-year player who is quietly an above-average offensive player. Last season in only 116 at-bats, he hit .293, with 5 home runs, and a 126 wRC+. Willie Calhoun is another sleeping giant in the Rangers lineup as in only 78 games last year he hit .269 with 21 home runs, and a wRC+ of 110.

Among all 30 MLB teams, my model projects the Rangers to score the 24th fewest number of runs. Even if their best players stay healthy and live up to their potential, the Rangers are going to struggle against the best pitchers of the AL West. That is why you should bet against the Rangers this season.

As far as the Rangers pitching is concerned, they are projected to give up the 12th most runs out of all 30 MLB teams. The Rangers were active this offseason in acquiring former Cy Young winner Corey Kluber, and Kyle Gibson. While both of those starting pitchers will be an improvement, The Rangers pitching staff is still a disaster waiting to happen. My model projects the Rangers bullpen to have a 4.49 FIP which would be the worst FIP in the AL West, and 25th worst FIP in Major League Baseball.

Additionally, the best two starting pitchers from last season 33-year-old Lance Lynn and 32-year-old Mike Minor are bound to have a regression after career best performances last season. Based on the bend but don’t break nature of the Rangers pitching staff, the lack of depth in the Rangers lineup, and the strength of the Rangers schedule, I am betting on the Rangers winning fewer than 29.5 games.

Besides the Texas Rangers, another AL West team that I am looking to fade this season are the Oakland Athletics. The Athletics have a reputation for building teams are a quietly good based on their general manager Billy Beane.

But for this season when you ignore the allure of a general manager once played by Brad Pitt in the movie "Money Ball", you realize that the A’s winning at least 34 games is a stretch which equates to a 56.7% winning percentage.

In a 162-game season, a 56.7% winning percentage would translate to a 92–70 record. It is hard to imagine any team except for the Yankees or the Dodgers winning that many games this season if they had to play the Astros and Angels for 1/3 of their games. That is why I am betting on Oakland winning fewer than 33.5 games this season.

One reason why the A’s are well regarded by the betting markets this season is that their lineup is good. My model projects Oakland to score the 10th most runs out of all 30 MLB teams. Of the A’s starting lineup, seven out of their nine players are projected to be above-average offensive players.

With such a well-rounded lineup, at any moment the A's can take advantage of a fatigued pitcher. While the Oakland lineup might be a reason to not take the under on the Oakland A’s if they played in any other division, the Los Angeles Angels and the Houston Astros are expected to have better lineups than them. That is why I am betting against the A’s this season even though they have a strong lineup.

While the Oakland A’s have a well-rounded lineup, their pitching staff is a dumpster fire waiting to happen. They even have a starting pitcher Mike Fiers who has fire in his name and he is projected to have a 5.17 FIP. In addition to Fiers, two other unreliable starting pitchers on the Oakland A’s staff are rookies A.J. Puk and the often-injured Jesus Luzardo.

Outside of their bottom 3 starting pitchers, the top two pitchers -- Sean Manaea and Frankie Montas -- are projected to be average when compared to the rest of the league. While the starting rotation is suspect, it should be noted that my model projects the Oakland bullpen to have a 3.87 FIP which would equate to the 3rd lowest FIP out of all 30 MLB bullpens.

However, for a bullpen to matter the team using that bullpen has to quality starting pitching which the A’s do not have. Based on the Athletics' schedule and starting pitching staff I am betting on the Oakland A’s winning fewer than 33.5 games this season.