Major League Baseball is finally going to start this year on July 24th when the New York Yankees face the defending World Series Champion Washington Nationals. Before COVID-19 postponed the beginning of the MLB season in March, various sportsbooks had win total bets for each of the 30 MLB teams.

While I had my own picks for the originally scheduled 162 games season, I must throw out all that analysis because this shortened season is going to be radically different. Not only will each team play only 60 games this year, but who they will play will be much different.

Over the 60-game season, each team will play 40 games against their own division, and then the remaining 20 games against interleague teams from the same region. The other radical change is that National League teams will have a designated hitter for the first time. The result of both changes mean that National League lineups are going to be radically different, and teams in competitive divisions will be at a larger competitive disadvantage than usual. 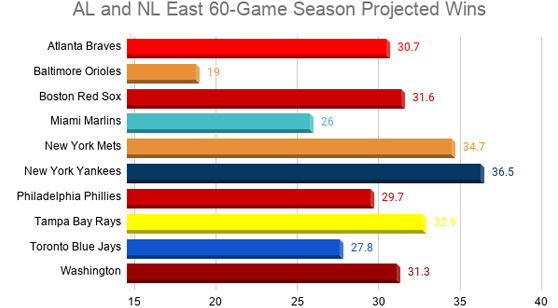 For the upcoming MLB Season, I have two win total plays that I am backing based on my above projections. I am betting on the New York Mets to win more than 31.5 games, and the Baltimore Orioles to win fewer than 21.5 games.

Last year, the Orioles were dreadful as they finished the season with a 54-108 record. While there is a cliché that you should buy low and sell high, betting against them this year is a sell low play that has immense value.

Before the scheduled 162-game season, it might have been unthinkable to bet on the Orioles winning less than 35.5% of their games as that translates to a 57-105 season and it’s natural for young teams to improve the next season. However, the new 60-game season will be worse for the Baltimore Orioles winning percentage as they must play half of their games against the New York Yankees, Boston Red Sox, and Tampa Bay Rays.

While my model projects the Orioles to have a 38.4% Pythagorean winning percentage, when you match them up to their opponents, they end up with a 19-41 record which equates to a 31.7% winning percentage. If Baltimore played in the AL Central this would be a bad bet, but because they play in the AL East the win total bet is 2.3 games higher than what the total should be.

My model not only projects Baltimore to have the worst record of any team this year, they also project Baltimore to score the fewest runs out of all 30 MLB teams. Among the Orioles lineup, my model doesn’t project an offensive player having an above average DRC+ (Deserved Runs Created Plus). Their best projected offensive production is from 25-year-old Austin Hays who has only played in 60 career games.

In addition to scoring the fewest runs out of all 30 MLB teams, my model also projects the Baltimore Orioles to give up the most runs out of all 30 MLB teams. One reason for this is that their starting rotation is projected to be trash. Based on pre-season projections from Baseball Prospectus, out of Baltimore’s starting rotation the only starting pitcher projected to have a sub 5 FIP is John Means.

The poor New York Mets never get the respect they deserve even in their own city. According to a 2018 Quinnipiac poll, only 34% of New Yorkers are Mets fans compared to the 53% that are Yankees fans. Even in Queens where the Mets play, there are more Yankees than Mets fans.

However, despite their lack of popularity the 2020 Mets should not be overlooked. That is because they finished the 2019 season on a high note with the 2nd-best record after the All-Star Break going 46-26. My model projects the Mets to win 34.7 games which is why I am betting on the Mets winning over 31.5 games at -110 juice.

One reason why I believe that the Mets are going to win more than 31.5 games this year is that I can’t think of a National League team that will benefit from having a Designated Hitter more than them. The highest paid position player on the Mets is the oft-injured Outfielder Yoenis Cespedes who makes $27.5 million a year.

Facing the reality that Cespedes is often injured, talented, and in the final year of his contract, the Mets have already announced that they plan to utilize the DH spot in their lineup on Cespedes. My model projects Cespedes to be an above-average offensive player. In addition to Cespedes, the Mets lineup which includes sluggers Pete Alonso, Jeff McNeil, and Michael Conforto is projected to lead the NL East in runs scored.

In addition to great hitting, the Mets biggest strength is arguably their pitching. Their starting rotation is led by 2018 NL Cy Young winner Jacob deGrom who can always be counted on to perform. While the Mets lost Zach Wheeler to free agency, and Noah Syndergaard Tommy John surgery, the rest of the Mets starting rotation is still solid.

New York still has Marcus Stroman, Michael Wacha, Steven Matz, and Rick Porcello who are all projected to have FIP’s between 4.06 and 4.54. While those aren’t great numbers, all four of those starting pitchers are dependable and the New York Mets bullpen is going to be more reliable in 2020 after having a 4.71 FIP in 2019.

Mets closer Edwin Diaz for example is expected to rebound in 2020 with a 2.91 FIP after having a 4.51 FIP and -0.5 WAR in 2019. In addition to Diaz having a rebound performance, the Mets also added reliever Dellin Betances in free agency who is projected to have a 2.77 FIP.

Based on the Mets pitching and hitting I believe that betting on the Mets winning more than 31.5 games is the best win total over bet in the AL and NL East.