Western Conference NBA action returns to NBATV this Monday night with another star-filled matchup between the Dallas Mavericks and the Phoenix Suns, and VI is getting you ready with more Best Bets to help handicap tonight’s slate of games.

Despite dropping the front end of the double-header on Saturday night, the Mavericks head into Monday’s contest as a 3-point favorite over the Suns – marking just the seventh game so far this season that Phoenix has entered as an ‘underdog’ in.

While the total for this contest currently sits at OU 217.5 – which is just the 4th time this season that the ‘over-under’ for a Mavericks game has stooped below 221. 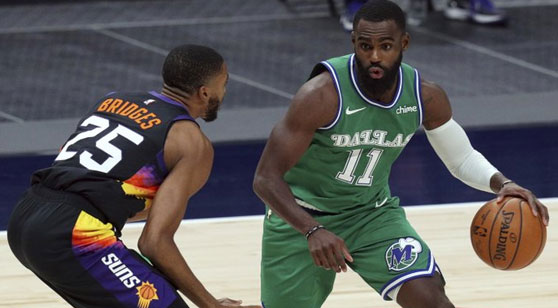 The Mavericks and Suns finish off their two-game series on Monday night at American Airlines Center. (AP)

Dallas comes into Monday night’s tilt currently riding a 5-game losing streak, which includes a 6-point loss to the Suns without Devin Booker in their most recent affair.

Saturday night’s matchup was a showdown between opposing point-guards – as Luka Doncic and Chris Paul managed to rack up 29 points apiece on a combined 50% shooting from the field in the Suns' victory.

Cameron Johnson got the start in place of Booker in the Suns most recent matchup, but it was Langston Galloway who ended up making the most out of his extended time on the floor – 23 minutes, 12 points.

Phoenix comes into this game as winners in back-to-back contests (Suns, Warriors) but prior to their recent success, the Suns had lost five of seven matchups to some underwhelming opponents. (Memphis, Washington, Detroit, Oklahoma City, Denver).

The Suns’ victory over the Mavericks this past Saturday now gives Phoenix a five-game winning streak over Dallas, with two of those wins already coming since the start of the new NBA season.

Phoenix and Dallas’ first matchup of they year came on opening night as Doncic led the contest in scoring by a 10-point margin, but the Mavericks shot just 24.3% on 37 attempts from downtown compared to the Suns’ 36.7% on 30 attempts, which ultimately led to a 4-point Dallas loss.

The second time around, Dallas shot the 3-ball significantly better than it did the first time out (31%), but it still wasn’t enough to hold off the Suns’ efficient offensive team-effort – with three of Phoenix’ five starters registering double-digit points on 50% shooting or better.

While the Suns have also been mediocre so far this season offensively (110.4 PPG), the same cannot be said about their defense – currently ranking 5th in the NBA in points allowed (107.5), 8th in opponent 3-point percentage (35.5%), and 7th in overall defensive efficiency (1.051).

The ‘under’ has cashed in four out Phoenix’ last six contests, now keeping 11 out of 18 Suns’ games under the total so far this year.

Although both these teams are known to possess some of the league’s premier scoring threats, Dallas and Phoenix have been rather underwhelming on offense so far this year – especially the Mavericks, who currently rank 21st in the NBA in points per game (108.7) and 20th in effective field goal percentage (52.6%).

The return of Kristaps Porzingis to the lineup following off-season knee surgery was originally thought to answer a significant portion of Dallas’ offensive problems, but quite the contrary has occurred since his return – considering the Mavericks have now lost 8 of their last 11 games while scoring 108 points or less in seven of those contests.

Saturday night marked the fourth consecutive contest that Booker has missed with a hamstring injury, and he is listed as questionable yet again for the back half of this double header on Monday.

If he is unable to go again, look for Johnson and Galloway to continue to see significant minute-bumps and for CP3 to keep putting up 15+ shots per game (has exceeded 15 FGA in four out of last five games).