Non-Conference NBA action will take center-stage during Thursday’s nightcap with the Los Angeles Lakers set to host the Brooklyn Nets on TNT, and VI is getting you ready with another slate of Best Bets and Game Previews to help handicap all the evening’s top matchups.

The Lakers head into Thursday’s contest as short favorite over the visiting Nets, marking the 14th consecutive matchup that LeBron James and company have opened as the favorite in.

While the total for this matchup currently sits at OU 238.5 – which is just the second time this season that the ‘over-under’ for a Lakers game has been set above 230. 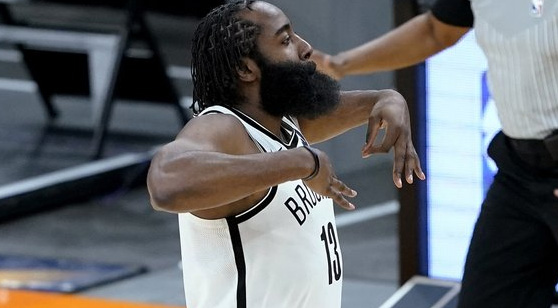 James Harden and the Brooklyn Nets are starting to cash tickets, winning and covering their last four games. (AP)

Although the Lakers have reigned victorious in eight of their last nine contests, they have only covered the spread in four of those wins – with three of those losses ATS coming in overtime matchups that L.A. was favored by 9 points or more in.

Los Angeles has managed to cover the number in two of their last three matchups though, with its only loss ATS across that span coming in a SU loss to the Nuggets, which happened to be the contest that Anthony Davis suffered his most recent injury in.

Kyrie Irving and Kevin Durant both sat out during Brooklyn’s most recent affair with Phoenix, but the Nets still managed to mount a double-digit comeback behind 19 combined fourth quarter points from James Harden and Joe Harris to steal a third consecutive victory to kick off their current road trip.

Brooklyn and Los Angeles split a pair of games during last year’s regular season, with one matchup going 'over' the total points number for Thursday’s contest and the other staying 'under'.

The most recent affair between these teams came right before last year’s COVID-19 shutdown – which resulted in a slim victory for the Nets, as 25+ points apiece from James and Davis still wasn’t enough to hold off Brooklyn during the absence of Irving.

In the most recent meeting between these teams, the Nets may have been able to pull off the upset victory over Los Angeles without Irving, Durant, or Harden on the floor.

But I am still hesitant to conclude that Brooklyn’s superstar additions have given them an edge over King James and this year’s Lakers team.

Brooklyn’s Big 3 has posted a combined record of 18-38 in regular season matchups against LeBron throughout the course of their careers (which includes non-postseason matchups that Durant participated in with Golden State).

The ‘over’ has now cashed in three straight Nets games, bringing that clip up to 22-8 on the year – which is easily the highest percentage mark in that category across the league.

Despite currently owning the second-best SU record in the NBA, the Lakers rank 16th in the league against the spread with a record of 14-15 against the number so far this year.

Davis exited the Lakers loss to the Nuggets back on Valentine’s Day and has failed to get out on the floor for Frank Vogel’s team since. King James seemed to pick up his counterpart’s slack rather effortlessly in a win over the Timberwolves this past Tuesday though – as LeBron racked up 30 points on 65% from the field in an 8-point victory.