Although the Los Angeles Lakers were off this weekend, they received some bad news on Sunday.

It was announced that Jared Dudley tore the MCL in his right knee on Sunday evening, and he will likely miss the remainder of the 2020-21 NBA season. That’s the latest in a string of injury blows for the Lakers.

That means the Lakers will be shorthanded entering Monday night’s road game against the Golden State Warriors. 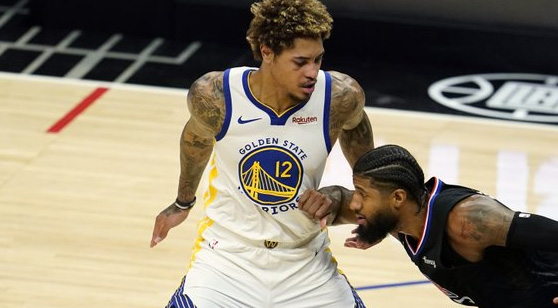 Golden State will be facing a back-to-back spot Monday and it's gone 3-5 both SU and ATS on no rest this season. (AP)

The Warriors lost three consecutive road games before the All-Star Break, falling on the road to the Lakers, Trail Blazers, and Suns. They were hammered by the Clippers on Thursday night, getting outscored by 34 points in the second and third quarters, prior to yesterday’s victory.

Draymond Green posted a triple-double and Steph Curry led all scorers with 32 points in Sunday’s 131-119 win over Utah.

Rookie James Wiseman and Andrew Wiggins both had strong performances for the Warriors too in the win, doing a great job of getting off quality shots underneath. It was a rough game for Donovan Mitchell as he finished with a game-low plus/minus of -26.

The Lakers entered the All-Star Break on a two-game losing streak. Their injury woes played a big role in their downturn over the two weeks leading into the break, as the defending champions are 3-7 since Anthony Davis was knocked out of the lineup.

Kyle Kuzma helped lead the Lakers past the Indiana Pacers on Friday to halt the losing streak.

LeBron James posted a double-double too with 18 points and 10 assists.

LeBron James is going to have his work cut out for him on Monday. The Lakers haven’t looked nearly as good with James having to take on even larger roles given their injury issues. He is averaging 25.6 PPG, 7.9 RPG, and 7.8 APG, but he isn’t as able to drag his team to victories as he did with Cleveland throughout his 20s. James is making 50.7% of his field goals and 35.7% of his threes.