Non-conference NBA action will resume on Sunday night with the Raptors set to host the Trail Blazers at seven o’clock eastern time in Tampa, Florida.

So, VI is getting you ready with a variety of betting resources to help handicap all the evening’s top matchups.

The Raptors head into Sunday’s contest as a 1-point favorite – snapping Portland’s three-game streak of being listed as a favorite.

While the total for this matchup currently sits at OU 228.5, which is a couple points lower than the ‘over-under’ set for the contest between these teams that took place back on January 11th (U 230.5). 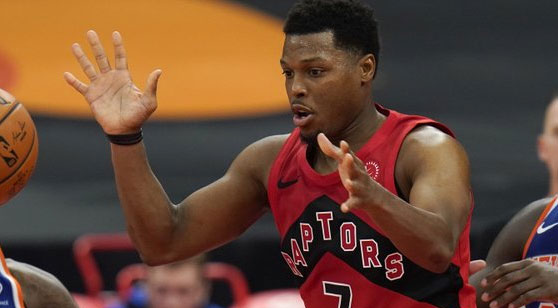 The Raptors have lost 10 of their last 11 games as they look to bounce back against the Blazers. (AP)

The Blazers head into this matchup following wins in back-to-back games – with Portland’s latest defeat coming at the hands of the Nets this past Tuesday.

Damian Lillard sat out with a bruised left knee during Portland’s most recent affair against the Magic, but the unavailability of the All-Pro guard’s services didn’t appear to hamper Portland much on the way to another victory – as five different Blazers eclipsed double-digit scoring in the contest, highlighted by 22 points apiece from C.J. McCollum and Norman Powell.

On the other hand, the Raptors have split their last two matchups SU and ATS. Prior to those two games though, Toronto rode a nine-game losing streak SU dating back to March 3rd.

The Raptors' most recent affair resulted in a four-point loss to the Suns, which was a contest Toronto had absolutely nothing going from long-range in – shooting 12-44 (27%) from beyond the arc, as a team.

The Trail Blazers have won two of their last three regular season meetings against the Raptors – with their most recent victory over Toronto coming this past January.