Postseason Western Conference action is set to kick off with a play-in tournament double-header on ESPN this Wednesday night – beginning with San Antonio and Memphis at 7 PM ET, which will be followed by Golden State and Los Angeles after.

So, VI is getting you ready with a variety of betting resources to help handicap both critical matchups on the evening’s slate.

Los Angeles heads into Wednesday’s matchup as a five-point favorite over the visiting Warriors – which is the fifth consecutive game the Lakers have been favored in, after being listed as underdogs in four straight games prior to their current run.

The total for this event sits at 219.5 – marking the lowest over-under set for a Warriors’ game since they matched up with Toronto back on April 2nd (U 219.5). 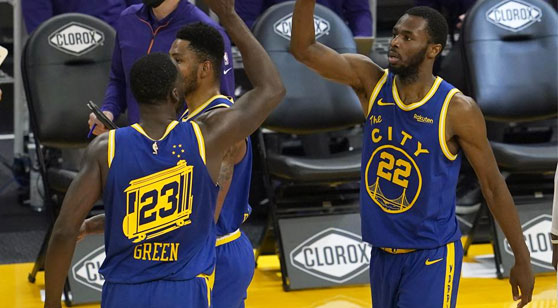 The Warriors head to Los Angeles on Wednesday night looking for their second win over the Lakers this season. (AP)

The Warriors wrapped up this year’s regular season on a remarkably high-note – heading into Wednesday’s matchup boasting wins SU and ATS in eight of their last nine games, with Golden State’s only loss during that timeframe coming on the second half of a back-to-back set against the Pelicans.

On the flip side, after struggling for months due to the extended absences of LeBron James and Anthony Davis, the Lakers finally started to get healthy down the homestretch of the regular season – and it showed across their latest stretch of matchups.

Los Angeles heads into Wednesday’s play-in riding a five-game winning streak – which includes victories over three teams still alive in this year’s postseason, despite King James only participating in 56 minutes of action across that stretch.

The Lakers have claimed victories in two-of-three matchups against Golden State this year – with two of those contests going 'over' the total set for Wednesday’s affair, and the other staying 'under' thanks to the Warriors shooting 8-of-34 from downtown during their 91-point losing effort.

Interestingly, the only regular season matchup between these teams that contained both parts of L.A.’s superstar tandem took place back in January, and ended up resulting in Golden State’s lone victory over the Lakers this season.

The other two regular season meetings between Golden State and Los Angeles took place back in February and March, which ended up falling right in the middle of AD’s extensive period of absence.

The Lakers easily took care of business with stifling defense in both of those affairs though – as the Warriors shot just 21-of-71 from beyond the arc across those losses, while Stephen Curry was held to an average of 21.5 points per game on a total of just six successful three-point attempts.

The Warriors may be long past the days of 60-win seasons and stringing together consecutive NBA Finals appearances.

Golden State still has the best shooter in the world though, and they certainly are not afraid to use him – considering Curry has posted 30-point performances while attempting 13 or more long-balls in eight of his last nine regular season outings.

Steph’s supporting cast has played well during his recent hot streak too – highlighted by a recent scoring surge from Andrew Wiggins, who averaged 26 points per game across his final eight regular season outings.

Despite ranking 12th in scoring this season (113.7), Golden State has still managed to cash ‘under’ tickets at the second-highest rate across the league in that department – with total in Warriors’ games finishing up at a 58.3% clip on the year, which only trails the Lakers (60.6%).

After winning last year’s NBA title in Orlando, the Lakers added some key rotational pieces to their rotation during the offseason, and managed to never skip a beat while kicking off their current campaign – considering L.A. boasted a record of 21-6 prior to the calf injury Davis suffered that sidelined him for over two months.

For obvious reasons, Los Angeles cooled off significantly after the injury to Davis – but King James still managed to keep his team afloat for some time without his partner in crime on the floor, considering the Lakers posted a record of 7-7 during their first 14-game window without AD.

After that mediocre stretch though, LeBron suffered an ankle injury that forced him to sit out for over a month, which is where things really went south for L.A. – considering the Lakers followed up with a disappointing 7-9 run during the absence of both superstars, ultimately landing them the seventh seed out west.

Since returning from injury back in mid-April, the Lakers have consistently relied on Davis to carry the bulk of the scoring load in tough matchups – finishing up the regular season with an average of 28 points per game across his final five outings, which led to wins in all those contests.

I’ll back Davis to have another big night on the scoreboard here, as King James still seems to be dealing with a lingering ankle issue that could potentially lead to AD pulling some of LeBron’s weight during this year’s postseason.

Heading into May, it was almost time to start worrying about Golden State’s postseason chances – considering the Warriors wrapped up the previous month at a 31-32 SU clip for the season, and were staring down the barrel of a three-way race to the finish line against San Antonio and New Orleans for the final two playoff spots in the conference.

Golden State ended up winning eight of its last nine contests behind a spectacular scoring run from Curry though – which earned them the eighth seed and a first round play-in game against the Lakers.

I’ll lay the points with the defending champs here, as I still believe Los Angeles is ‘the team to beat’ when their best five is on the floor – and unfortunately for Golden State, that will be the case in Wednesday’s play-in game.