Baltimore Ravens' QB Lamar Jackson put on a spectacular show every time he was out on the field in 2019, as he now comes into 2020 as the reigning league MVP. Given that Jackson's end of 2018 saw him be reluctant (or Baltimore was) to even throw the ball at all. Jackson sure made sure he turned that around quickly though. 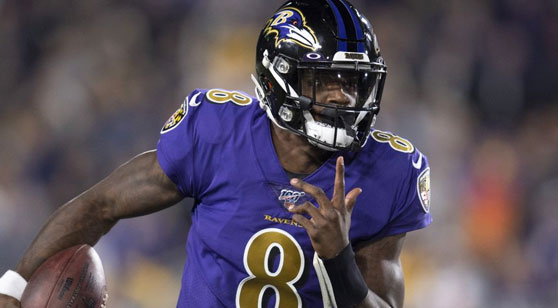 Can we see a similar story for someone else in 2020? Another young QB in a similar role ready to take that big leap forward? That could quite possibly be the case as there are numerous candidates in that regard. Odds are that it will be another quarterback that wins this award in 2020, and that's where the handicapping begins.

The easiest thing to do regarding any MVP futures selections right off the top, at least from a historical perspective, is ignore any WR names. Never in the history of the league has a wide receiver won the MVP award, and given that they are so reliant on the QB's decision making and arm talent to get them the ball, it will be the QB's in those situations that get more recognition.

Going further, every single MVP has been a QB or a RB since Lawrence Taylor won it in 1986 with the New York Giants, making that a run of 33 consecutive years. Only eight of those 33 seasons have seen a RB win the award, so if that history is any indication, you'll want at least 75% of the names you back in this futures market to be a QB.

Oddsmakers know all that as well, and that's why you'll see the first 11 names atop the odds board all quarterbacks, led by the past two league MVP's with Patrick Mahomes (+400) and Jackson (+600) as the favorites.

The AFC is looking for it's fourth straight MVP winner in 2020, after Brady was the winner in 2017. Mahomes and Jackson deserve to be the top two names here when it comes down to it, and if those two guys play a full 16 games, lead their team to a division title and possibly the 1st overall seed in the conference for one of them, they'll show why they are priced the way they are. Not entirely sure there is a whole lot of point in betting either of them at those prices though. This is a futures market that can fluctuate quite a bit throughout the year. It's going to be so rare that you can't find a better price on either of them at some point during the season.

Tom Brady is an interesting case, as a MVP win in 2020 would be the fourth of his career. But you don't find too many names on the list of past MVP winners that accomplished the feat in their first year with a new team. Expectations are already through the rough for Brady and the Bucs this year, and you could argue that it's those expectations that have influenced his MVP price point to be where it's at.

And if you are of the belief that Brady already may be a bit overvalued because of the hype surrounding he and the Bucs already, the fact that no MVP winner in the modern era has won the award in his first year with a new team is another piece of support to build your case of avoiding Brady.

Can't avoid everyone in this future market though, especially when you can dig long enough and find some potential holes everywhere. There are a few QB names on the list that are rather intriguing, beginning with Aaron Rodgers in Green Bay being priced below names like Carson Wentz and Deshaun Watson. No disrespect to those two QB's, but Rodgers is already an elite talent that warrants MVP discussion every year. He's going to have to do more with less in Green Bay in all likelihood then either of those QB's would in their respective divisions, and should be thought of as such.

Further on down the list in the middle tier and long shot range, you've got names like NFC West QB's like Jimmy Garoppolo (+5000), Jared Goff (+8000) that could easily take that next step in their careers and become talked about in MVP conversions. San Francisco and L.A. are the last two NFC representatives in the Super Bowl, and should either team post a quality season like 12-4 SU or better, it's hard not to seriously consider the QB on the best team in the league as a MVP candidate. The Rams may not currently be thought of as one, but San Francisco definitely is, and you are still getting their QB at 50-1 odds. Tough to ignore.

Finally we can't completely omit the running backs, even though they may be more likely to win the award of any other position, it's still not a high percentage overall. And the only two RB names that deserve any looks at MVP would also require their young, rebuilding teams to shatter expectations and play well over their heads by grabbing a top seed in the NFC, not just a playoff spot.

Giants RB Saquon Barkley (+5000) and Panthers RB Christian McCaffrey (+5000) are those two names, but New York and Carolina would have to ride that elite play to a position well above reasonable expectations this year. That's a bit too far out of reach realistically, but with the workload those two backs should get in their respective offenses, any success either of those teams have in 2020 will go directly through them.