Hot and Not Report - Week 5

The variance we had with the records of home underdogs regressed back to the mean in Week 4 relative to the divisions teams were in, as AFC/NFC East home dogs ended up 2-1 ATS, while the home dogs from all the other divisions that had done so well ended up 0-2 ATS.

Trends like that have a tough time having staying power as there really isn't a statistical or conceptual basis behind those results being what they are, nor is there anything that could fly in the face of conventional stat lines to potentially take advantage of some slightly shaded point spreads.

That latter idea is the focus this week as in the betting market where it's all about what teams have done lately and what we've seen last, there is a trend that's shown up this year based solely on the offensive yards per point stat from only the previous week.

Last week's action is what all the discussion and reference points seem to be centered on each week, so why not use a one-game number in the yards per point stat and expect some regression to the mean there as well.

Backing the worst 5 teams in offensive yards per point from just the previous week has gone 9-4 ATS this season.

Offensive yards per point is a stat is something I like to use to outline the consistency a particular offense moves the ball down the field with, and more importantly, capitalizes on making the most of their scoring opportunities. That's when you are considering the full season though, as the number for just the last game can boil down to a lot of varying factors. Who the opponent was, where the game was played, injuries etc etc. So there is a lot more randomness to the one game offensive yards per point, as sometimes it's just teams having a bad game/matchup. But so much analysis refers back to what we saw last, so why not look at something statistical that fits that same bill.

So this is a trend that starts in Week 2 – needing the numbers from Week 1 to start – with Green Bay ranking the worst after their debacle against the Saints in Week 1. The four teams that fell right behind the Packers after that opening week were Atlanta, New England, NY Giants, and Buffalo, and Week 2 saw those five teams go 4-1 ATS with the Falcons being the only loss after failing to cover +13 at Tampa Bay despite being down 28- 25 after the 3 rd quarter.

The five worst offensive yards per point from Week 2's games (in order starting with worst) – NY Jets, Philadelphia, LA Chargers, Dallas and Detroit – ended up going 2-1 ATS too, as the Philadelphia/Dallas game cancelling itself out.

And this past week saw the NY Giants, Pittsburgh, New England, Seattle, and Houston qualify as the worst 5 teams in offensive yards per point in Week 3, and those five teams ended up with a 3-2 ATS record in Week 4, with two SU wins as underdogs (NYG, Seattle). In fact, of the six SU wins these teams have had this year, three have been underdogs outright, with both the Chargers (Week 3 over KC) and the Giants (Week 4 vs New Orleans) doing so as touchdown underdogs. Those poor performances we saw from these teams just a week ago almost always has early line movement working against them, and depending on who the opponent is, an extra point or so could be added to the initial number to begin with.

For this week, Week 4's worst teams in the offensive yards per point category are Minnesota, Denver, Detroit, Cleveland, and San Francisco. The Vikings and Lions are playing one another to excuse itself from consideration, meaning plays on Denver (+1) at Pittsburgh, Cleveland (+1) at LA Chargers, and San Francisco (+5.5) at Arizona are the qualifying options.

Denver has QB Teddy Bridgewater in concussion protocol this week so holding off until there is more news on that situation is probably the best way to go with the Broncos/Steelers game. It's not like Pittsburgh has shown much of anything good on the football field since their Week 1 win over Buffalo though.

Where the number currently sits though, this game will get talked about as the Steelers just needing to win at home, and should Denver be down to QB2 for the game, Steelers support will show up. It will probably show up regardless given that it is a line so close to pick'em, so if you're looking for another reason to possibly jump on Denver later this week, keep this trend in your back pocket.

San Francisco is in a similar boat as they've got injury concerns at QB too, as it could be the Trey Lance show from the outset in Arizona on Sunday. The Cardinals are the only unbeaten team left in the NFL and just dismantled a Rams team that did the same to the defending champs from Tampa the week prior, so the Cardinals stock is already pretty high right now.

The spread did open up at -4.5 on Arizona pretty much across the board, so Arizona love has already pushed it up a point, and it's in that range now where it won't take much to make a move to -6.5 or -7. Easily another game to wait on the news out of San Francisco and on where this number continues to go before adding the 49ers to the card.

Which leaves Cleveland as probably the best option here, but they've got a pretty unique scenario themselves. Usually teams who end up in the bottom 5 of offensive yards per point don't end up winning that game, but Cleveland managed to do so in Minnesota last week, being just the second team (Dallas over LAC in Week 2) to be in the bottom 5 of this stat off a win. In both instances, both teams made the list for the following week.

Dallas responded with a no doubt cover in the 41-21 win over Philly the following week, but Cleveland's out on the road in LA to face a much tougher opponent, the LA Chargers. Don't see cruising to a 20-point win as a likely outcome for the Browns on the road, but beating LA SU and ATS is more than achievable, especially with LA in a tighter spot coming off a shorter week and big divisional win in prime time.

A play on the Browns is definitely the most welcoming of the three this week for those reasons, as it's also a spot in this offensive points per yard trend doesn't have you holding your nose with a bad team. That 9-4 ATS run includes two Giants games, two from New England, and one from the Jets, Lions, Houston, and Steelers, a group of six teams with a combined 5-19 SU entering this week.

But those six teams are also 5-3 ATS in those eight games mentioned, so going ugly isn't always a bad thing. It just feels better that you don't have to with the Browns in this case.

If covering point spreads is sort of spitting in the face of conventional wisdom for these teams off a highly unproductive offensive week (being in bottom five in offensive yards per point), then looking at the 'under' for those teams the following week is something that's about as conventional as it comes.

Teams that end up in this category just had a week where they either couldn't move the ball much at all and struggled to score, or they did have some success moving it, just couldn't manage to put as many points up as they should have. Tough to completely fix all of those issues in just a week – which makes the ATS record the following week so puzzling and unconventional – but it also suggests to a defense that they've really got to be willing to carry the majority of the weight right now to help out a struggling offense.

The combination of those two things are what's going to lead to 'unders' cashing in these games, although three of the four 'overs' that have connected so far this year have come in divisional matchups (3-4 O/U overall in divisional games). That's a spot for the San Francisco/Arizona game that's already seen significant 'under' action on the total, likely in part due to the SF QB situation.

The Cleveland/LA Chargers total has been hit by some 'under' support already as well, and the Denver/Pittsburgh game has a total of 40 which is hard to go 'under' on from a sheer numbers standpoint in today's NFL.

Once again it would be that Browns/Chargers game I'd hone in on in terms of supporting this trend, as it's another game that could feel a bit more intense and playoff-like given that's where both teams expect to go. Also, Chargers “home” games have been a great 'under' bet ever since they moved to LA. 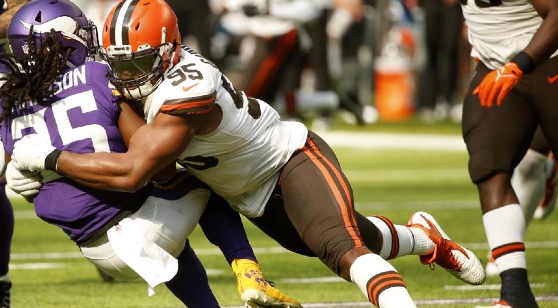 The Cleveland Browns have gone UNDER the point total in four of their last six road games. (AP)

The Chargers went 2-6 O/U at home in 2017 (first year in LA), 3-4 O/U in true home games in 2018, 2-5 O/U in 2019, and 3-5 O/U last year. With the 2020 season being the exception, I do believe the lack of home field advantage the Chargers have had throughout that whole time has really contributed to this 'under' run at home. The benefit an offense gets at home is usually silence to help with communication and hopefully execution. The Chargers don't get that at home with all the noise from visiting fanbases yelling in their ear all the time.

So I never mind looking low on the totals for Chargers home games, but I'll see if this total can possibly creep back to 50 or better before deciding to add it to the card. A Mayfield vs Herbert matchup is going to generate plenty of discussion this week, and hopefully it can help get this total back into the 50's before kick-off to make that 'under' play.