In possibly the most anticipated Week 1 matchup on Sunday’s slate, Tom Brady will start his journey as a Tampa Bay Buccaneer by squaring off with his newfound division rival, Drew Brees and the New Orleans Saints in an empty Mercedes-Benz Superdome.

Saints' head coach Sean Payton begins this season dreading the possibility of this year being his 13-time pro-bowl quarterback’s final season in the league.

The oddsmakers are not making any exceptions for the “GOAT” in his Buccaneer debut, as Tampa Bay will head into its first game with TB12 under center as a three and a half-point underdog against the reigning NFC South Champion Saints.

However, that has not stopped the Brady believers from emptying their banks on him as 58% of bet tickets for this contest have come in on Tampa so far.

The total for Sunday afternoon’s contest has been set at OU 48, which is currently the fourth-largest Week 1 ‘over-under’ on Vegas big boards. 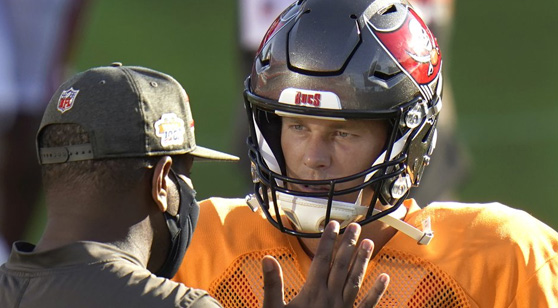 QB Tom Brady will make his Tampa Bay Buccaneers debut on Sunday when the club meets the Saints in New Orleans. (AP)

The last time these quarterbacks squared off in a regular season game dates all the way back to 2017, which was a contest in which Bill Belichick’s Patriots came out on top 36-20, behind 447 passing yards and three touchdowns from TB12.

Luckily for Payton’s crew this upcoming Sunday though, Brady plays for a different team and has a different coach, so the look of this year’s Week 1 contest is going to look – different.

Payton might not want it to look too different though, because despite how great Tom performed in his most recent outing with New Orleans, he was brutal to watch in his prior three matchups with the Saints as he failed to complete 60% of his passes in all three contests.

Brees, on the other hand, has been great against Tampa Bay for the entirety of his career, posting a lifetime record of 18-10 against his divisional foe while raking in 7,866 passing yards on 68.7% completions against the Bucs.

In the one matchup Brees participated in against Bruce Arians' team last year, the Bucs high-powered offense could not get anything going against the Saints, as Payton’s team rolled 34-17, behind a 122.8 passer rating and 80% completion percentage from #9.

Buccaneers vs. Saints
Handicapping the Side

The public seems to be all over Tampa Bay in this matchup and I cannot find a reason to put money on them other than the pure feeling of “Brady Nostalgia.”

The Buccaneers own the edge in the pass-catchers department, currently rolling out the Evans-Godwin-Gronkowski three-headed monster to anchor their receiving core – but other than that, I lean towards New Orleans in almost all other aspects of the game.

Just to start, Pro Football Focus ranked the Saints’ offensive line second in the NFL (1st – IND), which is a steep climb for the generously, 13th ranked Tampa Bay O-line. New Orleans won both matchups against the Bucs last year by scoring 32.5 ppg and in one of those games, Teddy Bridgewater was the starting QB who threw for 314 yards and three touchdowns.

I love the Saints this year as I think they should be the stand-alone favorite to claim the NFC crown in what will likely be Brees’ final run at a second Super Bowl.

It may be tough to see through the fog and predict what we will see out of the newly revamped Buccaneer offense on Sunday following its offseason QB swap, but at least we know what the Saints are capable of versus Tampa, as New Orleans scored 31+ points in both contests against the Bucs last year.

Tampa Bay throws the ball more than any team in the NFL as the team threw for over 4,800 passing yards just a season ago, which puts them in similar company with the Falcons and Cowboys who love to run up point tallies.

New Orleans and Tampa Bay both averaged 28+ points per game last season and I think there is a good chance offenses come out of the gate much stronger than defenses this year as quarterbacks like Brady and Brees should be able to navigate defenses pre-snap rather easily with no crowd noise impairing their communication.

I am staying away from ‘over-unders’ in Week 1, but if I had to choose a side here, I would bank on seeing rusty defenses and ride with the ‘over’ in this game.

After it originally being reported that Mike Evans was dressed in pads for practice on Friday and was trending towards playing Week 1 with a minor hamstring issue, the Texas A&M product is now listed as doubtful for Sunday evening’s tilt. If Evans is unable to go, look for Chris Godwin and Scottie Miller to fill big pass catching roles against New Orleans.

The Buccaneers are going to need more help than just the addition of a 43-year old quarterback that played like a shell of himself last season, if they want to rise to the top of the totem pole in the NFC South this year.

I do not think the Bucs are the best team in this division, even with the addition of TB12, and on a certain level I believe Brees and company are going to rudely welcome Brady to the black-and-blue conference on Sunday evening with an overwhelming sack total in his NFC debut.

Give me New Orleans -3.5 here as I think Brady has a frustrating first day without Belichick in his corner.