The annual opening week double-header for MNF has returned even in a pandemic year, and it begins with the Pittsburgh Steelers and New York Giants battling to determine which one of them will start the year 1-0.

It's the Steelers who are favored to do so, as they look to make one more run at a title with QB Ben Roethlisberger at the helm. But the nature of is elbow injury is always going to be a little questionable, especially with there not being normal training camps/preseason for him to really work out those kinks (and maybe fears).

The Giants come into 2020 with basically a whole new regime, as another former Patriots assistant in Joe Judge, gets a crack at a NFL head coaching gig.

Judge has been in the news cycle multiple times during the past few weeks, most of the time for simply being a hard-ass. People may want to rip that approach and question his tactics especially in the pros, but who was the last Giants head coach that actually brought success to the organization? A hard-ass named Tom Coughlin. So it will be interesting to see just how well 2020 turns out for the G-Men. 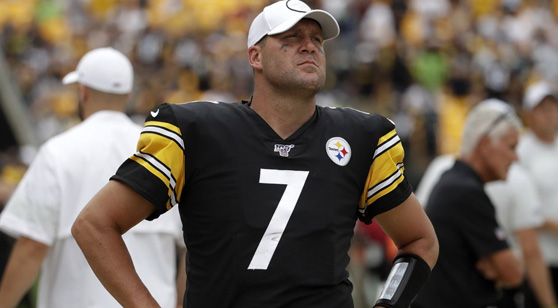 Steelers QB Ben Roethlisberger will make his return to the gridiron as Pittsburgh meets the N.Y. Giants on Monday. (AP)

Steelers vs. Giants
Handicapping the Side

The concern about Roethlisberger's ability to produce with those elbow issues does make the side a much easier betting option to consider, and I can only look the other way.

The Steelers are already a team I have questions about at the WR position with Juju Smith-Schuster and Diontae Johnson being their top two guys, with neither of them being very big – Smith-Schuster is the taller of the two at 6'1” - and any Chase Claypool hype that I hear brings me back to the idea that I do believe it will take multiple weeks for rookie pass catchers in this league to find their footing.

We could also see a noodle-like arm from Pittsburgh's QB coming back from that elbow surgery on top of all that, and it's that bunch that's expected to win by a TD? I just don't buy it.

On the flip side, I do expect Jones and this Giants offense to be able to move the ball well enough against this Steelers defense to at least threaten an outright win for the majority of this one.

Having Garrett as the OC does give you some semblance of what to expect, and not having the burden of being the head guy anymore should be a huge weight lifted off Garrett and allow him to just go out and do what he loves to do - call plays.

New York has slowly built their offense into one that's got great pieces scattered everywhere in terms of both talent and a nice mix of veteran leadership with all the young guys. They've got a RB in Saquon Barkley who automatically demands attention, and any team with someone that special knows that room elsewhere should have no problem opening up.

The Steelers defense is stingy, but this is still their first 'live' game action this year, and even in an empty stadium, communication issues and defensive breakdowns are still likely to occur.

Finally, we may not know much about what the Joe Judge era will look like in New York outside of some hard-ass practices so far, but this is a little gem I picked up while researching this game. New NFL head coaches are on a 15-3 ATS run in their first game when they are a home dog. Just a little icing on the cake of this Giants play.

A couple of things to point out that makes it very easy to simply avoid this total.

One, I've got no idea how healthy Roethlisberger is, although all reports out of Pittsburgh camp suggest that he's back to 100%. But a 100% at 38 years old when Roethlisberger has spent the bulk of the last half-decade taping himself up with duct tape just to keep himself together is probably not anywhere near where the typical “100%” resides for the majority of the NFL players.

Not only has he been a plagued by injuries in recent years, last year's elbow injury is definitely not one where you can jump back in right away and expect to be at the level you were before. Throwing arm injuries take plenty of time to come back from, and after getting surgery during the season last year, he was only cleared to throw a football in February.

Sure, it's been awhile since February, but now he's got to deal with all sorts of traffic in his face and body parts flailing at his arms. All it takes is for one little crack to happen and it could be right back to the drawing board.

In the Giants case, we don't have a great idea of what to expect from Judge's regime, although having Jason Garrett as the OC does ease some of those concerns. But how quickly can 2nd year QB Daniel Jones pick up a new system and then successfully execute it?

Both QB situations make it not an easy place to be if you expect points for an 'over', and not a guarantee of an 'under' if both guys do actually perform well. So seeing this game land exactly on 46 would not surprise me at all.

Both defenses should carry their own weight, and I'm much more skeptical about Roethlisberger's ability to produce, and when he's on the favored side, that tends to be concerning news for those on the 'over.'

Although the first half of these Week 1 MNF double headers has a 8-1 O/U run going the past nine seasons, including 4-0 O/U the past four.