Week 2 of the NFL season gets going with a divisional battle in the AFC North between the Bengals and Browns. Both teams are looking for substantial improvements this year after going through tough 2019 campaigns, and both sides can't feel too good about how they opened up the 2020 season.

In Cleveland's case, the Browns continue to be the way better in their own minds then they are on the football field, as they got blasted by Baltimore 38-6. The Browns didn't score a single point in the final three quarters of that football game, as Cleveland did what Cleveland always does; continues to shoot themselves in the foot.

Fumbles lost, thrown picks, and a missed field goal all made an appearance in the calamity of errors the Browns dealt with on Sunday, and if this team ever wants the world to see just how good they believe they are in their own heads, crap like that has to get cleaned up in a hurry.

Cincinnati wasn't without their own miscues in their 16-13 loss to the Chargers, a game in all likelihood they should have won. Kicker Randy Bullock missed a chip shot FG to tie at the end of the game as he blew out something in his leg on the approach, and that was after the Bengals thought they had a game-winning TD already.

But wide receiver AJ Green's catch in the front corner of the end zone was called back for being a push-off, as #1 overall pick quarterback Joe Burrow got his first, first-hand experience as to why this team is un-affectionately known as the Bungals.

Burrow did have plenty of good moments in that first career start though, and at least after one week it does look like his future should be bright in this league.

But it's still only one week though, and now Burrow is in that dreaded spot all rookie QB's must endure – their first road start in the NFL.

There will be some fans in the “Dog Pound” for this Cleveland home game, but I would also venture a guess that the usual notion of basically auto-fading rookie QB's in their first road start probably isn't nearly as strong this season with empty stadiums. 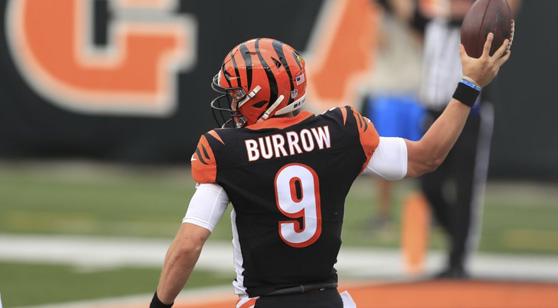 Cincinnati rookie QB Joe Burrow will get his first taste of AFC North action when the Bengals meet the Browns. (AP)

Thursday Night Football games off a short week are always going to get plenty of noise about backing 'unders' with the idea behind it being the quality of play will be suspect with such little prep and recovery time. For the most part in recent years, looking low on totals for Thursday games tends to be a good place to start, and after these two teams combined to score just 19 total points in their respective Week 1 contests, we've already seen plenty of 'under' support for this game.

The total opened up as high as 46 in some spots, before instantly getting bet low and reaching it's current price of 43.5 basically by Monday afternoon. That's definitely a drop to be aware of.

But in this particular case, I'm not sure I fully agree with it. Yes, going against the majority consensus for this game specifically and TNF in general on the 'under' can be troubling, but when I envision these two teams squaring off, I see a game with two young QB's not being gun shy in the slightest, probably with a costly turnover or two thrown in for both sides. Both offenses understand that they've got to be much better in executing on offense, and neither the Bengals nor Browns defenses are likely to provide a tremendous amount of resistance.

Cleveland may have gotten smoked in Baltimore last week, but they did finish the game with 20 made 1st downs (to Baltimore's 23), and had 31 more rushing yards than Baltimore. You know that Ravens team that's got a spectacular rusher under center and had a game script to where running the ball late to drain the clock was readily available to them.

Moving the ball wasn't the issue for Cleveland there, it was protecting the football, penalty issues and making the most of their opportunities that ultimately made that box score look much worse than it probably should have. The Chargers rushed for 155 yards on 39 attempts against the Bengals last week, so there is plenty of yardage to be gained on the ground for Cleveland. If Baker Mayfield can mix that up with some timely connections in the passing game, moving the ball up and down the field against Cincinnati shouldn't be a huge problem. The Chargers were horrible themselves in converting red zone opportunities into TD's last week vs Cincy, but they did have three chances to do so.

At the same time, Burrow and the Bengals attack showed flashes of brilliance during a few drives only to have them stall in the worst ways. There was a shovel pass INT that Burrow threw in the red zone in the 2nd half of the game, and the ending has already been talked about. Baltimore gashed Cleveland's secondary with a strong passing attack – Lamar Jackson went 20-for-25 for 275 yards and 3 TD's – so there should be that blueprint available to the Burrow and the Bengals offense to find success here.

Finally, we can't forget about these two franchises being perpetual basement dwellers in this division the past few years and the fact that when they do meet up to play one another in what both sides have to view as highly “winnable” games, we've often seen points.

The last five meetings between these two have gone 4-0-1 O/U in recent years, with the last three games all having closing totals in a very similar range (44, 43, 44). There is no doubt in my mind that oddsmakers had this recent run of Bengals/Browns game in mind when they opened the number in the 45.5/46 range, but the knee jerk/hot take reaction on a week-to-week basis that is otherwise known as the NFL betting market each year made sure their voice was heard early in dropping this line to where it currently sits.

Therefore, it's only the high side of this number I can look at now, as both QB's know they've got something to prove right now, and I expect both to embrace a duel if it does indeed turn out that way.

Bengals vs. Browns
Handicapping the Side

The side is something that is easier to pass on this week, if for nothing else than the notion that it's easy to figure these QB's/teams will make a costly mistake at some point, but pinpointing on who or which team it will be makes it a quite passable option.

If forced to choose a side, I would be grabbing the points with the Bengals, as Burrow doesn't have all the baggage that Bengals teams in the past have had, nor anywhere near the baggage that Baker Mayfield and this current Browns core currently have.

Not to mention that Cincinnati does fit into this scenario I brought up earlier this week where they are catching points against an 0-1 SU favorite. I'm not entirely sure the Browns should be laying nearly a TD against anyone in 2020 – at least until they prove they can come anywhere close to all that smoke they blew up the world's ass last summer during their hype tour.

However, it's still that dreaded “rookie QB in first road start” that I can't be thrilled about bucking if I were to have a Bengals ATS ticket in my pocket, so the side is an all-around pass, at least before kick-off. There could easily be in-game betting scenarios that pop up where much better numbers arise on both sides.