The new betting favorite to win the NFL MVP, Russell Wilson (+300) and the Seattle Seahawks will host Mike McCarthy’s Dallas Cowboys in America’s Game of the Week on Fox this Sunday evening at 4:25 p.m. ET.

The paths traveled by Dallas and Seattle in 2020 have not closely resembled each other so far, but has left Sunday’s contest equally important for the two squads as the Seahawks and Cowboys both find themselves tied for a share of their respected NFC division crown.

The Seahawks opened as a three and a half-point favorite against the Cowboys following victories over the Falcons and Patriots in Weeks 1 and 2, and we have seen that number climb up to Seattle -5 heading into the weekend as the public continues to back Pete Carroll’s team to grab its third consecutive win to start the season.

This contest opened with the highest total on Sunday’s NFL slate at OU 55 points, but the public still felt that was not high enough, as the oddsmakers were forced to bump the ‘over-under’ up to OU 57 with the majority of early bet tickets coming in on the ‘over.’ 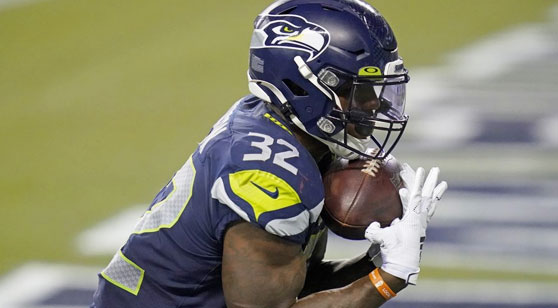 The Seahawks' offense has clicked through two wins as Seattle welcome in Dallas on Sunday afternoon. (AP)

The last time Dallas and Seattle met up was in Jerry’s World during the Wild Card Round of last year’s playoffs, which resulted in a 24-22 win for Jason Garrett’s Cowboys.

Dak Prescott got his first post-season win under his belt, despite having a relatively mediocre game, completing 22 of 33 passes for 226 yards with 1 TD and 1 pick – he also ran one in. Michael Gallup was quiet in the contest, but the same cannot be said about Amari Cooper, as the wideout officially made the trade with the Raiders worth it in the playoffs by hauling in seven receptions for 106 yards in the Cowboys’ win.

The real difference-maker in last year’s contest though was Seattle’s inability to stop the run, as they allowed Ezekiel Elliott to rumble for 173 total yards and a touchdown for the game. On the other side of things, the Seahawks failed to get anything going on the ground, rushing for just 45 combined yards as a team, aside from a Rashaad Penny 25-yard run.

Last year’s playoff win makes Prescott and Elliott 1-2 SU against the Seahawks for their careers.

Cowboys vs. Seahawks
Handicapping the Side

We actually luck out a little here as Seattle and Dallas are one of the few teams already this season that share a common past opponent in the Atlanta Falcons.

Although it may not have appeared like it thanks to two garbage-time touchdowns from Calvin Ridley, the Seahawks stomped Atlanta in Week 1, leading the game 31-12 in the early-goings of the fourth quarter before finishing the contest with a deceptively close tally of 38-25.

After being pushed around by the Rams in McCarthy’s first game behind the wheel, Cowboys fans everywhere could be found in fits of rage when their team fell behind 20-0 in the first half against Atlanta. The Falcons just fell apart in the second half like they tend to infamously do though, getting outscored by Zeke and company 30-10 in the final two stanzas.

So far this season, Seattle has undoubtedly been the team to beat in the NFC while Dallas should be considered lucky to be knotted up with the Washington Football Team in the division standings at this point and time.

The Cowboys are banged up on the o-line and I just have not seen enough out of Kellen Moore’s offense so far this season to back them against a unit that is running-up 36.5 points per game on defenses this season.

If you are going to pick a side here, please do not waste your money on Dallas.

The Seahawks have cashed ‘over’ tickets in both of their games so far this season by scoring 38 points against Atlanta and 35 points against the Patriots, respectively. It also does not help that Seattle’s secondary, headed by Jamal Adams, has struggled much more than anticipated out of the gate after acquiring the former-Jets safety this past offseason.

Dallas and Los Angeles had one of the rare Week 1 ‘unders’ by losing to the Rams 20-17 on opening Sunday, but the ‘over-under’ was never in doubt in their second game – combining for almost 40 points in the first half against Atlanta and easily cashing ‘over’ tickets.

The Cowboys will be without Leighton Vander Esch in this one, and Jaylon Smith has been downright bad so far this year. ‘Over 57’ is a scary total to bet which is why I am electing to stay away from the ‘over-under’ here, but if I had to lean in a direction for this game’s total, I would lean with the ‘over.’

Do not be fooled by Seattle’s lengthy injury report, the players Dallas could be missing on Sunday are much more critical than the players the Seahawks have already lost to the injury bug.

The Cowboys have a top-10 offensive line in the NFL when the whole crew stays healthy, but that quickly falls apart when they begin having absences and are required to move guys around up front.

Keep an eye on Tyron Smith’s status heading into this one, as Dallas will already be struggling to fill La’el Collins’ shoes at the tackle spot.

Wilson has thrown 9 touchdown passes, 11 incompletions, and just one interception, guiding the Seahawks to back-to-back victories to open the 2020 season and has secured himself a spot on the “way too early” MVP ballot through Week 2.

I am going to ride the hot hand here and take Seattle -5 as I think this depleted Dallas defense will have real tough time stopping Chris Carson and company on the ground when it matters most on Sunday evening, leading to another Cowboys’ loss.