The AFC North takes center stage to close out Week 14. There aren't many out there that would have had Cleveland coming into this game with a better record by two wins on Baltimore at the beginning of the year. But the Ravens have been hurt by injuries, virus protocols, a constantly shifting schedule, and poor play at times.

On top of it all, to not look much like the 14-2 SU team they were a year ago. But at 7-5 SU and a very soft schedule coming down the stretch, Baltimore's future is still in their own hands. This is still a game the Ravens would prefer to get after Tennessee and Indianapolis won on Sunday to get tonine wins, leaving Miami the lone AFC team currently occupying a playoff spot with fewer wins.

Baltimore's got Jacksonville, the Giants, and Cincinnati left to close out the year. A strong finish can still be had, but things are that much more comfortable for them with a win over Cleveland. Baltimore won the first meeting 38-6 SU back in Week 1, but the two teams are quite different now, and Cleveland's confidence is through the roof at the moment.

The Browns enter this game having won four in a row, some in very tough playing conditions, and when a team starts rattling off wins of the “any time, any place,” variety, they become very tough to beat.

So will Baltimore's push towards the playoffs continue with another win over a division rival they typically beat up on, or will “little brother” Cleveland prove they are for real this year and avenge that earlier blowout this season? 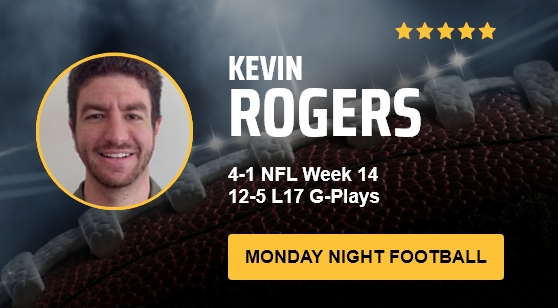 The Cleveland Browns are growing rather comfortable playing in adverse weather conditions this year, and Monday's forecast is calling for wind gusts that are big enough to make a significant impact here. Both offenses have strong running games to begin with and will likely lean on them regardless, as even if the wind isn't a big factor, there is only one way I can look at this total; Under.

The first meeting stayed low, and flipping the result this time around would be something I would have been more comfortable with had the forecast not be what it is. However, even in a normal December night for the game, neither coach can have tremendous confidence in either QB chucking it around the yard given the turnover issues both have had this season.

Three turnovers by Cleveland are what did them in during that first meeting, and when the Ravens get a comfortable lead and can lean on teams with their rushing attack – like we saw against Dallas last week too – the chances of success for their opponent are next to none.

Plenty of running plays should be expected regardless, and because of that, and the confidence I've got in both teams to protect the ball much better this time around. Going UNDER the total here is a comfortable approach knowing the potential for wind to cause havoc in the passing game is lurking as well.

This game means quite a bit for both sides in terms of playoff seeding, and I believe the cliche of this one looking like a playoff game is how it ultimately plays out. With points coming at a premium.

Ravens vs. Browns
Handicapping the Side

If you've ever questioned how much impact the last game played by NFL teams can have early in the market, all you have to do is look back at how this line has reacted throughout the week.

Before Baltimore played on Tuesday last week, an opener of Baltimore -2.5 was bet into the pick'em range on the back of Cleveland's strong performance in a win over Tennessee. Sight unseen for the week, the Ravens were getting bet against early and often with plenty wanting to take any plus-money or points they could with a Cleveland ML or ATS bet, fearing we'd have a scenario where the favorite flips.

Well, the Ravens responded with their own strong performance on Tuesday in blowing out the Cowboys. Once that result was final, out this line came back crawling up to it's open of -2.5 on Baltimore. Baltimore near a pick em price all of a sudden seemed cheap, and the Ravens plays got snatched back up.

Now here we are 24 hours before kickoff and the number has essentially remained static, although that's far the from truth. Belief in the Browns is hard not to have to some degree with how they've played the past month or so, winning all of these “any time, any place” games.

With weather expected to be another concern for this game – heavy wind gusts are expected – Cleveland on their own field having played in similar conditions already only furthers any Browns argument.

However, when the team on the other side of the field leads the league in rushing yards per attempt (5.2 yards per rush for Baltimore), the advantage Cleveland has had in that regard (ranked 4 th in rush yards per attempt at 4.9) against previous foes in poor weather does negate some of the Cleveland enthusiasm.

Never mind that it's also a division rival who has frustrated QB Baker Mayfield on numerous occasions throughout his career. If the wind does pick up as expected, I would think that both sides rely heavily on their rushing attacks with the one the executes better in the end is the one that comes away with the victory.

I do lean towards the Ravens in that regard, but part of that is steeped in futures wagers I've made on Baltimore in the past, and the doubt of really believing Cleveland is a mature enough team to take that next step 9-3 SU teams do to legitimize themselves as true contenders.

This is also just the second game in Cleveland's last six that they've played a team with a winning record, with Tennessee being the other last week. Still would prefer to take the approach of forcing Baker Mayfield and the Browns to beat me in that regard for Cleveland games right now, but a Browns outright win would not be shocking at all.

That said, Baltimore finds a way to get it done to make their playoff standing sturdier.