Saturday night's AFC action between Baltimore and Buffalo has to be the game I'm most excited for this weekend, and for the longest time it was tough to put my finger on exactly why.

I think the fact that we will get either quarterbacks Lamar Jackson or Josh Allen in the AFC Championship game plays a really big part in it though, as no matter how the other game shakes out we will get an interesting story.

A third game between Baltimore and Cleveland would be something after the show they put on during MNF a few weeks back, and a Baltimore/Kansas City AFC title game was supposed to be the game we got last year.

A Kansas City/Buffalo rematch on a “normal” week this time would bring plenty of intrigue, but can you imagine if it's a Cleveland/Buffalo AFC Title game?

One of those tortured fan bases knowing they are going to the Super Bowl.

So sign me up for next week already, but with snow as a potential backdrop for this week's Bills game, I won't be missing a play live of this one either. 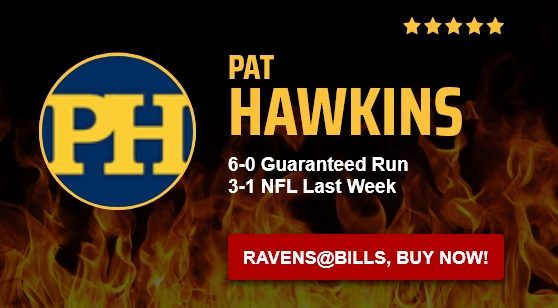 Under bettors from early in the week got there in Buffalo's win over the Colts last week, while the 'under' in Baltimore's win over Tennessee was a result that was never really in question.

Snow in the forecast always brings out differing opinions on how much it changes the perspective of a game, and so far an opening number of 50 has finally caved in.

Baltimore's defense looked really good last week, and if they are successful in playing their ball control game and play with a lead, the 'under' argument makes plenty of sense.

Even in a close game where Baltimore's rushing attack leads them to some scoring success, 50 is still a big number to need on a cold Buffalo night. No question these two teams could get there, but that result will come with plenty of nervous moments.

Baltimore's schedule hasn't been the toughest during this six-game winning streak, but they haven't allowed an opponent to score more than 14 on them since that wild 47-42 MNF win over Cleveland.

It does matter that the list includes Jacksonville, New York Giants, Cincinnati, and Tennessee, but it also can't be dismissed.

The Ravens just didn't hold Tennessee to 13 points last week, they shut down everything after the first drive or so, and running back Derrick Henry couldn't do much of anything, even when Tennessee was playing with the lead.

Baltimore loves to bring the pressure and Allen has done rather well against the blitz all season.

Both sides should experience success on Ravens blitz packages, and how big those shock plays be for the respective clubs likely decides the game.

No problem with where the opener came from for this game, and no problem with the move downwards either. In terms of a flat wager, 'under' would likely be the side I'd land on. But I do think we see some points from both offenses as one of these two young QB's goes on to play for a conference crown. Putting the 'over' in a teaser leg looks so much better though, and that's what I've started the play for this game off with.

44-45 points should be had by these two teams, if even because Buffalo's 25th ranked yards allowed per rush defense will have its work cut out for them. For all the possible views on the effect of snow, a slippery surface should help the offense out more overall if for no other reason than they know where they are going and the defensive guy has to react.

Big plays from both offenses have become the norm this year, so teasing this total down makes plenty of sense. 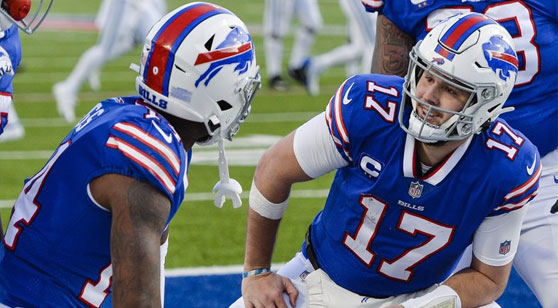 The Buffalo Bills have been a great 'over' bet this season, watching the high side go 6-3 at home. (AP)

Ravens vs. Bills
Handicapping the Side

Ultimately landing on teasing the total was made much easier because of the fact the side was about as textbook as it gets for a teaser option.

If you've been following my 'prediction' pieces all year you'll know that Baltimore futures in hand are coloring this perspective a bit, but in a matchup like this with the point spread hanging steady at -2.5 and now -3, it's the perfect teaser leg on the pure numbers side of things with Baltimore.

Teasing the Ravens up through the key numbers of 3,7, and 8 now is going to be a highly popular teaser leg for this game and rightfully so.

Could it lose? Of course.

Prior to beating the Colts by just three last week, Buffalo had been riding a six-game winning streak where their smallest margin of victory was 10 points. That Colts win was just the fourth time in 14 victories for Buffalo this year that they've won by less than a TD, so you can see why those extra points with Baltimore in this betting route may prove rather valuable.

The only Baltimore loss that came by more than a TD this season was their 34-20 defeat to the Chiefs in late September, as the Ravens style alone lends itself to them not getting blown out barring multiple turnovers.

Again, another reason to have those extra points in your pocket.

Any result in and around a FG win by either side would likely mean it was a game well worth watching, and while preferring to see Baltimore be the ones to advance, any Bills story including them in the AFC Championship is a welcomed outcome as well.