The expectations remain high on Ryan Tannehill, Derrick Henry, and the rest of the Titans after a pair of playoff appearances the last two seasons.

Arizona is stuck in a tough division along with Los Angeles, San Francisco, and Seattle, all teams that have been to at least one Super Bowl since 2014.

The Cardinals boast a strong combination of Kyler Murray and DeAndre Hopkins offensively as this is a good opportunity for them to pull off a road upset in Week 1.

Bet in Tennessee
Bet in Nevada
Other Betting States

The Cardinals were in the playoff hunt until a Week 17 to the Rams as Arizona finished 8-8 in head coach Kliff Kingsbury's second year as head coach.

2020 was a roller coaster season in the desert as Arizona put together a pair of two-game winning streak and a three-game hot stretch, but the Cards also lost consecutive contests twice and dropped three straight from Week 11 through Week 13.

The Cardinals cashed the Under in 11 of 16 games last season, including in each of the first six contests. Arizona has covered in its last two opening day contests and are 7-3-2 ATS in past 12 games as a road underdog.

The Titans are coming off an AFC South title at 11-5 last season before getting bounced by the Ravens in the Wild Card round. Tennessee started last season at 5-0, but failed to cover in its first three wins in the favorite role.

Mike Vrabel's team was the opposite of Arizona from a totals perspective by hitting the Over in 12 of 16 regular season games, including in six of eight contests at Nissan Stadium. 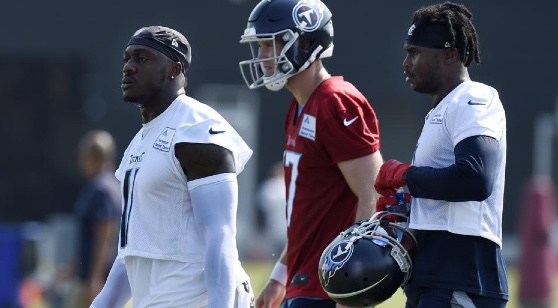