The Green Bay Packers and New Orleans Saints were expected to play at the Caesars Superdome in the Crescent City to kick off the 2021 NFL regular season, but Mother Nature had other plans. Hurricane Ida knocked out power to most of southeastern Louisiana, dealing a blow to New Orleans and the surrounding area, so the teams packed up and headed east on Interstate 10 to Jacksonville. The Jaguars are on the road in another Gulf Coast town, playing the Houston Texans in Week 1.

So the post-Drew Brees era begins in Jacksonville, against the Packers, of course. And as luck has it, northeast Florida is expected to deal with the effects of Tropical Storm Mindy, although it will likely be nothing more than a glorified rain shower, and clearing out of the area by Thursday afternoon.

The Packers really struggled in the preseason, going 0-3 SU/ATS, while averaging just 7.0 PPG on offense. But that isn't really indicative of much, as most of the starters played very little, especially on offense. The Saints also failed to cover both of its two preseason games before having a third game canceled due to Ida.

These teams faced each other in a marquee battle Sept. 27 last season, with Rodgers outdueling Brees and the Saints 37-30 as 3.5-point underdogs in Week 3. Rodgers is back, as is WR Davante Adams, despite reports the quarterback was unhappy with management for a good chunk of the offseason, and the receiver made some similar overtures. All appears well in Cheeseheadland, but the window could be open just for this current season before things change dramatically.

Things have changed dramatically in New Orleans, as it is going to be strange not seeing No. 9 under center. QB Jameis Winston takes the reins of the offense, with Swiss Army knife Taysom Hill likely to come on as a change of pace option.

Look for the Packers, with their existing core, to push past the Saints, who are in transition and now displaced from their home, too. 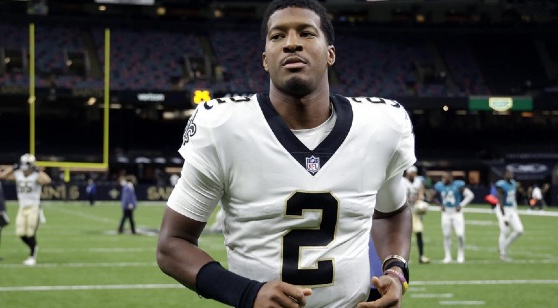 The New Orleans Saints have failed to cover the spread in six of their last seven season opening games. (AP)

Over the years, Winston has shown plenty of glimpses of brilliance. But he either takes too many chances, or just doesn't read defenses very well. The arm strength has never been questions, it's what's between the ears that seems to hold him back.

The quarterback vs. quarterback battle if it were Rodgers and Brees would have been even. But Rodgers vs. Winston isn't even a question. The Saints have traditionally struggled on a grass surface, too. The Saints do not start very well, either, going 1-6 ATS across the past seven regular-season openers. On the flip side, the Packers are 5-1 ATS in the past six openers, while going 7-1 ATS across the past eight games in the month of September, too.

Green Bay tends to start very quickly, too, in terms of the total. The OVER is 8-2 across the past 10 games in Week 1, while the OVER is 7-0 in the past seven regular-season openers for New Orleans. With trends like that, the OVER might be the best play on the board for Sunday's neutral-site game. And if that doesn't tickle your fancy, consider the OVER is 8-1 in the past nine meetings in this series.

Not only do I like the Packers, but even on a grass surface rather than a turf surface, we should see plenty of points.