The Hoosiers have picked up back-to-back victories at home against Ohio State and Minnesota, coming alive after a 61-58 road loss at Penn State as five-point favorites. Games at home haven't been the problem, it's when the Hoosiers hit the road. They're 0-3 SU/ATS in three true road games this season, including two conference road outings so far.

The Hawkeyes are still licking their wounds after an 87-78 loss at the Kohl Center against the Wisconsin Badgers last time out on Thursday. Iowa has failed to cover in each of the past two outings, and they're 3-4 ATS across the past seven games overall. Keegan Murray registered a game-high 27 points on 10-of-16 shooting for the Hawkeyes, and twin brother Kyle Murray was good for 12 points off the bench with three rebounds, two assists, two steals and two blocked shots. The Murray Brothers swatted five of the seven shots for Iowa. A big part of Iowa's problems came at the free-throw line, too, hitting just 58%, or 11-of-19, including Keegan Murray's 5-of-9 evening.

If Iowa cannot straighten out its free-throw shooting, they're going to be on the short end in a lot of games.

Indiana has picked up wins and covers in each of the past two outings, blasting Ohio State by 16 points on Thursday, and topping Minnesota by 13 points on Sunday. But those games came at home, and the Hoosiers have been a completely different unit on the road. The last time they hit the road they were on the short end of a 61-58 loss at Penn State as five-point favorites.

For totals, the UNDER is 14-5 in the past 19 games overall, while going 6-1 in the past seven on the road. The UNDER is also 4-0 in the past four as a road 'dog. The OVER is 19-7 in the past 26 against teams with a winning overall mark. The good news for IU is that the underdog is 5-1 ATS in the past six meetings in this series, too.

Iowa has failed to cover the past two games, but it hasn't had three or more consecutive non-covers in the regular season since an 0-5 ATS skid from Jan. 21-Feb. 7, including a pair of losses and non-covers against Indiana last season. 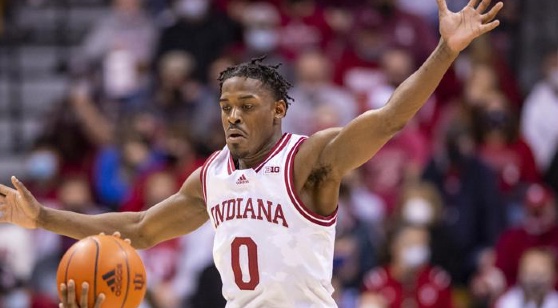 Indiana has played pretty good basketball lately, but all of that success has come at the Simon Skjodt Assembly Hall in Bloomington, not on the road. It's a completely different story when the Hoosiers hit the road, with the last victory in a true road game coming at Northwestern on Feb. 10, 2021 after seven straight losses away from home.

Iowa has a little more depth, as Keegan Murray is a jack of all trades who is going to make a run at Big Ten Conference Player of the Year, and Patrick McCafferty has stepped up as a solid secondary scoring option. Indiana has dominated this series lately, but it just cannot be trusted. Iowa is at home, and it will get it done in a hotly contested game.