The No. 19 Texas Longhorns travel to Harrah’s Cherokee Center in Asheville for Monday’s matchup against the Davidson Wildcats.

The Longhorns have been opened as eight-point favorites for this neutral site tilt with the total line for the game set at 137.5.

Texas is 1-0 both straight-up and against the spread following last Wednesday’s 91-55 victory against UT Rio Grande Valley as 21-point favorites while the total went OVER the closing 137 ½-point betting line.

The Longhorns are 6-1 ATS over their last seven games going back to last season. Total bettors should make a note that the OVER has cashed in six of the last eight games overall for Texas.

The Wildcats opened their season on Nov. 25 against High Point with an 82-73 victory. They failed to cover as 18 ½-point favorites and the total went OVER 137 ½ points.

Davidson went an 6-6 SU in non-conference play last season with a 5-7 record ATS in those 12 games. The total stayed UNDER in nine of the 12 games outside the A-10.

Texas got a big effort from junior guard Courtney Ramey in the season opener. He ended the game with a team-high 20 points and seven assists while going 7-for-11 from the field.

Four of five starters ended the game in double figures with forward Gerald Liddell adding another 10 points off the bench. Both Greg Brown and Jericho Sims pulled down 10 rebounds each in the winning effort.

The Longhorns opened up a 16-point lead at the half and cruised from there. They shot 57.4 percent from the field as a team while dominating the boards with 54 rebounds.

For a season opener, Texas looked rather sharp on either end of the court. However, Monday’s matchup should be a much tougher test.

Hyunjung Lee had the hot hand for Davidson in its season opener. The sophomore forward scored a career high 23 points while dishing out nine assists. He shot 57.1 percent from the field.

In what was an unexpected tight two-point game at the half, guard Kellan Grady helped the Wildcats pull away with his 20 points and six rebounds.

The starting five scored 77 of Davidson’s 82 total points with a very quiet bench.

Overall, the team shot a respectable 52.5 percent from the field while converting on 11 of 28 shots from three-point range.

The Wildcats pulled down 36 total rebounds with 27 on the defensive end of the court. 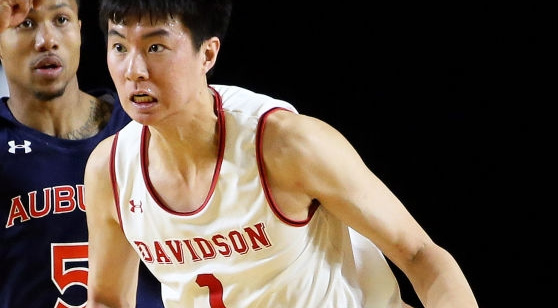 Hyunjung Lee looked sharp in the opener for Davidson but a tougher test awaits him on Monday versus an athletic Texas squad. (Getty Images)

Inside the Stats – Davidson Wildcats

Both of these teams got some excellent production from their starting five in the season openers.

Texas showed its edge in depth overall with a much more productive bench. Betting Davidson on a first half line might be a good play if posted, but the Longhorns should win this game both SU and ATS.

My lean on the total line would go towards the OVER. The combined lineup is packed with players who can shoot the ball.

Giving up 73 points to High Point does raise some concerns with the Wildcats’ defense. Texas should be able to take advantage of this edge to help run up the score.