Kansas enters the neutral court matchup with Kentucky as the favorite, given a -5-point spread. The spread may have to do with the fact that Kentucky was just beaten at home to A-10 opponent Richmond. This will be a much more difficult matchup for the Wildcats, despite Richmond projected as a March Madness team.

While Kentucky is licking wombs, Kansas is coming off a 20-plus point victory over St. Joseph's before dropping a big game to Gonzaga. Kansas is 1-1 ATS this season, but has gone OVER the point total in their only two games this season. Kentucky, on the other hand, has gone UNDER in both games played this season.

It's the same issue for Kentucky as it is every year, it's a young team that struggles early but gets better as the year progresses. That's the con of having one-and-done's at Kentucky, as Calipari's teams have a knack for starting slow but finishing strong.

Five of the Wildcats' top six scorers are freshmen, with Olivier Sarr being the only upperclassman in the top seven scorers for Kentucky. Brandon Boston, Terrence Clark and Devin Askew is a solid three-headed monster but won't become a threat until Askew starts to play well.

Askew is a Wooden Award candidate (along with Clarke and Boston), but is only averaging seven points per game. Overall, this is a typical Kentucky team with loads of potential but early season struggles. This is a game Kentucky can win, but the young talent will need to play past the stifling Kansas defense and outscore a potent Jayhawk offense.

Kansas' defense has been historically sound, but it's been the Kansas offense that has been in the spotlight through two games thus far. The Jayhawks have scored 90 or more points in both games played this season, led by Christian Braun who is averaging 19 points and nearly six rebounds.

Kansas has four players who average a double-digit point total, with three of those players averaging 4.5 rebounds or more per game. The Jayhawks are cleaning up nicely on the glass, something Kentucky will have to limit in order to win (second chance points).

This definitely feels like a youth vs. veteran matchup, as the Wildcats young trio will go up against the experience of Ochai Agbaji and Marcus Garrett. Jalen Wilson is an underclassman that may slip under the radar this evening, averaging 12.5 points and 6.5 rebounds per game. 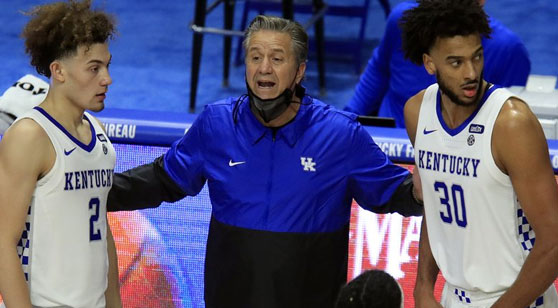 John Calipari's Kentucky squad looks to bounce back after getting upset by Richmond. (Getty Images)

Inside the Stats – Kentucky Wildcats

Inside the Stats – Kansas Jayhawks

It's tough to side with Kentucky after a home loss to Richmond, despite the talent Richmond possesses. The rinse-and-repeat pace of Kentucky struggling early and finishing strong is worth a thought here. The talent level is even with both schools, while Kansas gets the slight edge in experience.

One has to wonder when the stifling Kansas defense will return to form, but the current offense of the Jayhawks makes it tough to bet against. Kansas should win, but the -5-point spread is a toss up so other markets are worth considering. Kansas has won 15 straight prime-time games, winning the second half in 12 of those 15 games.