Tuesday night’s college basketball’s betting action is highlighted by a Big Ten/ACC showdown between the No. 13 Michigan State Spartans and the No. 9 Duke Blue Devils at Cameron Indoor Stadium.

Playing at home, Duke is set as a favorite against Michigan State. The total line for this game has been set at 151.5 points.

The Spartans have two games under their belts heading into Tuesday’s matchup. They have won both games straight-up with a 1-1 split against the spread. The total went OVER the closing line in each contest.

Michigan State is 1-8 SU in nine previous meetings against Duke with a 2-5 record ATS.

The Blue Devils beat Coppin State 81-71 in their season opener on Nov. 28 but came nowhere close to covering the wide 39 ½-point spread. The total ended as a PUSH on a 152-point closing line.

Duke has a SU eight-game winning streak at home with the total going OVER in 13 of its last 17 games overall. It has won 15 of its last 16 games against the Big Ten SU.

Through two games, forward Joey Hauser leads the team in scoring with 12.5 points per game while pulling down a combined 25 rebounds. Guard Foster Loyer has scored a combined 23 points while shooting 63.6 percent from the field.

With five players averaging at least nine PPG, the Spartans have shown good scoring depth in wins against Eastern Michigan and Notre Dame. They have been strong under the board as well with 85 total rebounds in those two wins.

This should be a great test for Michigan State after taking care of business in games it was supposed to win. Hauser and Loyer give the Spartans the best chance to pull off the upset. Forward Aaron Henry led the way against the Irish with 14 points and eight rebounds. He is another important piece of the lineup.

Duke’s dominance in this matchup cannot be ignored. The tight win against Coppin State could also work in the Blue Devils’ favor on Tuesday night as far as motivation to play better.

You cannot base too much on one win against a team you were supposed to beat handedly. Yet, freshman forward Jalen Johnson appears to be the real deal. He scored 19 points with 19 rebounds in his debut for Duke. Another impressive performance of note is freshman guard DJ Steward adding 24 points off the bench.

The Blue Devils turned to ball over far too many times to keep the opener close. You can expect some tighter play in Tuesday’s contest given the elevated level of the competition. 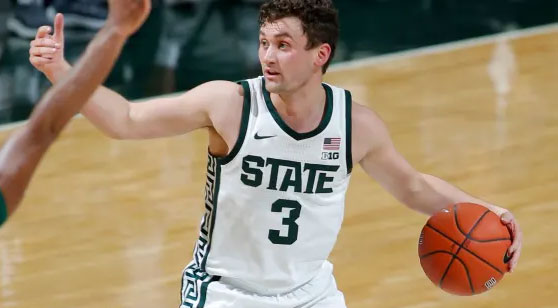 Foster Loyer leads Michigan State against Duke as a road underdog in the Champions Classic on Tuesday. (Getty Images)

This should be another great game between two of college basketball’s premier programs. The coaching matchup alone attracts quite a bit of early interest.

As mentioned, Duke has dominated this series over the years with eight SU wins in 10 meetings. However, these two are tied 5-5 ATS. The total has gone OVER in eight of 10 games as well.

My lean is with the Blue Devils at home. While the crowd at Cameron will not be a factor, this is still a big edge.

I am also going with the past betting trends favoring the OVER. There are legitimate shooters on either side of these lineups.