The No. 4 Wisconsin Badgers travel to Fiserv Forum this Friday night for a Big Ten/Big East tilt against the in-state rival Marquette Golden Eagles.

The No. 4 Badgers have been opened as eight-point road favorites against Marquette with the total line set at xx points.

Wisconsin is off to a 3-0 start straight-up as a heavy favorite in all three contests. It did fail to cover a pair of hefty spreads in its first two games with the total going OVER in both.

With Tuesday’s 82-42 romp over Wisconsin-Green Bay as 25-point favorites, the Badgers are 5-1 against the spread in their last six December games. The total has stayed UNDER in seven of their last 10 road games.

Marquette slipped to 2-1 both SU and ATS with Tuesday’s 70-62 loss to Oklahoma State as a slight 2.5-point favorite. The total has stayed UNDER in two of the three games.

The Golden Eagles are 4-13 SU in their last 17 games against the Big Ten. However, they move to an even 5-5 SU with a 7-3 record ATS in the last 10 games against Wisconsin. The total has stayed UNDER in six of the last nine meetings at Marquette.

Wisconsin is one of three Big Ten teams ranked in the top five of the AP’s Top 25 for Week 2. This will be its first big test after cruising to double-digit victories in its first three games.

Forwards’ Nate Reuvers and Micah Potter have combined to average 29 of the Badgers’ 83.7-point scoring average. They have also combined for 12 rebounds a game. Guard D’Mitrik Trice is the third player averaging at least 10 points per game. Potter has had the hottest hand with a 62.5% shooting average.

The Badgers are connecting on 50.3% of their shots from the field and 41.9% from three-point range. They are pulling down 39.7 rebounds per game while averaging eight blocked shots.

Marquette took a slight three-point lead into the second half of Tuesday’s loss to Oklahoma State but could not keep up the pace. Guard Koby McEwen led all scorers with 21 points while going 6-for-15 from the field.

McEwen is the team’s leading scorer after three games with an average of 15.7 PPG. The senior is one of four players averaging at least 10 points a game. He is shooting 41.9% from the field and 38.9% from three-point range.

The Golden Eagles have averaged 78.7 PPG with a 43.0 shooting percentage. The have been strong under the boards with three players averaging at least eight rebounds. This is part of the team’s solid 46.7 rebounds a game. 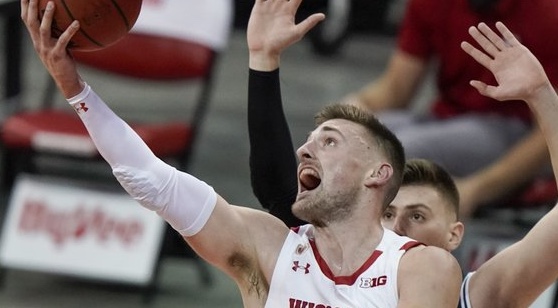 Micah Potter completes a layup for Wisconsin during the Badgers' win over Green Bay on Tuesday. (AP Images)

Inside the Stats – Marquette Golden Eagles

Wisconsin has positioned itself as one of the best teams in the nation in early play. However, giving eight points on the road to an in-state rival is always cause for concern. The Golden Eagles will be put to the test after getting tripped up their last time out. I am betting they come through at home by covering with the points.

As far as betting the total, I am leaning towards the UNDER given the recent trends at Fiserv Forum. Most of the battles between the two have been low scoring as compared to the closing total line.