As the highlight of this season’s Jimmy V Classic at Bankers Life Fieldhouse, the No. 1 Gonzaga Bulldogs square-off against the No. 2 Baylor Bears. Saturday’s tip on CBS is set for 1 p.m. (ET)

The Bulldogs get the slight edge in this WCC/Big 12 showdown as -3.5-point favorites. The total line for the game has been set at 161.5 points.

Starting with a 102-90 victory against Kansas as a four-point favorite, Gonzaga is 3-0 straight- up with a 2-1 record against the spread. The total has gone OVER in two of the three games.

With Wednesday’s 82-69 victory over Illinois as -4.5-point favorites, the Bears have now covered in their last seven neutral-site games. The total has gone OVER in five of their last six games played at a neutral site. In four previous meetings between the two, the underdog is a perfect 4-0 ATS.

Through three games, the Bears have outscored their opponents by a combined 77 points. Adam Flagler had the hottest hand among four players in double figures on Wednesday, with 18 points. Following a close first half, Baylor outscored the Fighting Illini 51-39 in the second 20 minutes.

Guard Jared Butler is the Bears’ leading scorer with 16.3 points per game. However, Flagler along with fellow guard MaCio Teague, are a close second with matching 15.7-point scoring averages. Baylor is putting up 93.3 PPG while shooting 51.2% from the field and 47.3% from three-point range.

The Bulldogs got a fast start out of the gate with the big win against Kansas. However, they needed a second-half comeback to get past West Virginia on Wednesday night.

This game will be the true test of their AP No. 1 ranking. Guard Joel Ayayi led the way in Wednesday’s 87-82 win with a game-high 21 points. He is one of five Bulldogs scoring in double figures as part of a 93-point team scoring average. 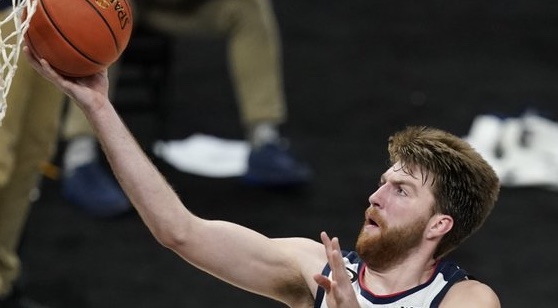 Drew Timme is quickly becoming one of the nation's top scorers for the Gonzaga Bulldogs. (AP Images)

Freshman standout Jalen Suggs tweaked his ankle in that game, but he was able to return to the lineup. Gonzaga’s top scorers through three games are forwards’ Drew Timme (23.3 points) and Corey Kispert (22.3 points). Suggs leads the team in assists (6.3) and Ayayi is pulling down 7.7 rebounds per game.

Inside the Stats – Gonzaga Bulldogs

This game should live up to all the hype as the highlight of the Jimmy V Classic. You also get the feeling these two will meet again deep into this season’s NCAA Tournament with a national title on the line.

As far as Saturday’s game, my lean is towards Gonzaga straight-up on a money line bet. I give the Bulldogs the slight edge in overall team depth. It is hard to ignore just how well Baylor played in the second half on Wednesday night. Yet, Gonzaga’s struggle against West Virginia could serve it well in such a big showdown.

The best bet in this one is the OVER on the total line. Each team should come close to or even surpass its scoring average with more than a few hot hands shooting the ball.