The Colorado Buffaloes (15-5) rumble into Maples Pavilion in Palo Alto, Calif. for a key Pac-12 battle against the Stanford Cardinal (12-7). Both teams are still very much in contention for the Pac-12 regular-season title with a few weeks to play.

Colorado is coming off a 78-49 demolition of a 10-win Oregon State side last time out, and the Buffaloes have racked up two straight wins and four victories in the past five, although they're just 2-4 ATS across the past six games overall.

This will be Colorado's first road game since Jan. 23, a 70-59 win at Washington State as 10.5-point favorites. This is also the second meeting of the season against Stanford. They won the first meeting in Boulder by a 77-64 count, covering the eight-point number on Jan. 16 as the total (141) actually pushed at most shops.

That loss to the Buffs served as the proverbial wake-up call for the Cardinal, as they have pieced together four wins in the past six games, although they're just 3-3 ATS during the span. That includes a home-and-home sweep of conference whipping boys Cal on Feb. 4-7.

It's a huge question as to where the Cardinal would be without Pac-12 Conference Player of the Year candidate Oscar Da Silva. He is one of four scorers on the Cardinal to average double digits in points, going for 19.4 PPG, a team-best 7.2 rebounds per outing, 2.5 assists per game and 1.1 blocked shots per contest. In a losing effort at Colorado in the first meeting he dropped 22 and 12, one of six double-doubles across his past 11.

The Buffaloes enter this game on a 4-1 SU run, but they're just 2-3 ATS over the past five outings. They are working on a streak of eight consecutive games with 70 or more points dating back to Jan. 11, a 65-58 win at Utah. The Utes have been a thorn in their side, as that's also the team which dealt them their only loss in the past five outings, a 77-74 setback at home on Jan. 30.

Over the years the road hasn't been terribly kind to Colorado, as they're 16-42 ATS in the past 58 on the road, so it's no wonder the public is flocking to Stanford for this contest.

The Buffs rank 34th in the nation in 3-pointer shooting percentage at 37.9, and they're the No. 1 team in the country in free-throw percentage, hitting an impressive 83.0 percent from the line. Defensively, Colorado allows just 63.9 PPG to rank 42nd overall.

Colorado will have to make do without a key contributor for a while, as F Jabari Walker (foot) is sidelined for at least another two weeks due to a foot ailment. He ranks sixth on the team with 8.2 PPG, while grabbing 4.8 RPG in his roughly 14 minutes of action per contest. 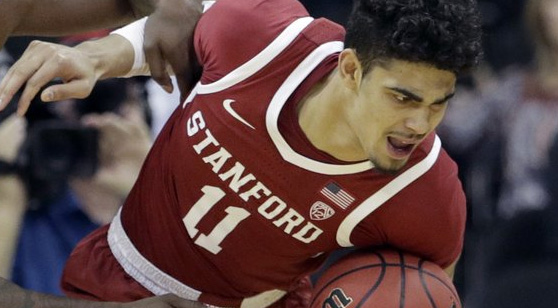 Jaiden Delaire and Stanford will be looking to avenge a 77-64 loss to Colorado on Jan. 16 when the pair meet again on Thursday. (AP)

Stanford is looking to build upon that momentum of the home-and-home sweep against Cal and keep hurtling toward the top of the conference standings. They're not a high-octane offense, but they have scored 70 or more points in five of the past six.

Stanford is averaging 72.3 PPG this season, but that's a bit skewed due to some bigger offensive totals earlier in the season during the non-conference scheduled. In fact, they have hit their scoring average just four times in the past eight games, and two of those outings they managed exactly 73.

The Cardinals aren't very accurate from long distance, hitting just 31.1 percent from 3-pointer land, and they're just so-so at the charity stripe, connecting on 72.8 percent from the free-throw line. Defensively, Stanford has been hard on opponents, allowing only 68.4 PPG, and they're 37th in the country with a 40.1 defensive field-goal percentage.

The loss of Walker recently is a blow to Colorado's depth, although they've been resilient with 80.0 PPG on offense across the past two games, both wins. And the win against Stanford on Jan. 16 is still a relatively fresh memory. However, the Buffs seem to be a completely different club on the road than at home. They're just 3-4 SU/ATS across their past seven true road contests.

Stanford has been stout when defending its home hardwood, winning four of five overall, including a signature win over Arizona earlier in the season, and a 73-72 thriller in overtime against UCLA on Jan. 23 as 5.5-point underdogs. In fact, that game against the Bruins was their bounce-back game after the loss at Colorado.