USC rolls into this one on a six-game winning streak since a setback Jan. 19 at Oregon State, 58-56. They have also covered five in a row since a non-cover against California on Jan. 23.

Arizona State entered this season with higher expectations, but they really struggled to kick off 2021. Lately, the Sun Devils have been showing some signs of life, making a run at a potential postseason spot somewhere. AZ State has won three of the past four outings, although they have covered just once in the span.

While USC lost its most recent meeting with Oregon State, if we're looking at common opponents, Arizona State has a leg up. They beat the Beavers 75-73 last time out on Sunday. 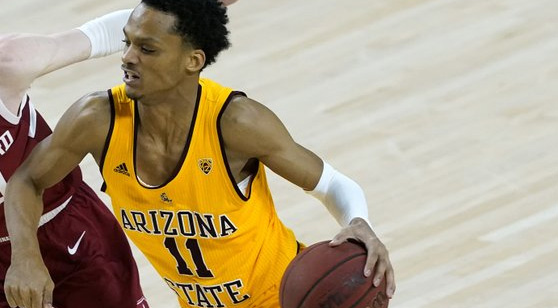 Arizona State is just 3-13 on the ATS this season, despite winning three of its last four games. (AP)

Arizona State has picked up the pace lately, but all of those games have been at home. Overall they're just 3-7 SU/2-8 ATS across the past 10 outings since a Dec. 13 win outside of the conference against Grand Canyon.

On the road, the Sun Devils are 2-2 SU/1-3 ATS in four true road outings, but they have dropped their past two at Arizona on Jan. 25, and at Oregon State on Jan. 16. The 'under' is also 3-1 in the four road outings for the Sun Devils.

Offense hasn't really been the issue for Arizona State. They have averaged 74.8 PPG to rank 99th in the country, although they're just 222nd with a 43.2 field-goal percentage and 262nd in 3-pointer percentage at 31.9. They're just a so-so free-throw shooting team, hitting 72.3 percent.

On the defensive end of the floor, the Sun Devils are allowing 76.6 PPG to rank 301st. They have a 44.9 defensive field-goal percentage to rank 242nd, and they're 254th in defensive 3-pointer percentage at 35.1. A reason for their slight uptick lately is that they're allowing just 72.8 PPG.

USC has fired to the top of the Pac-12 standings with their six-game winning streak, while covering five in a row heading into this one. Their only losses this season have come by two points at Oregon State on Jan. 19, by 10 against Colorado on NYE, and by three points on a neutral court against Connecticut back on Dec. 3. That's not bad for a team picked in the middle of pack by most preseason prognosticators.

The Trojans have posted a 5-3 ATS mark in their past eight games as a double-digit favorite, while winning seven of those outings straight up. The one loss is to Oregon State as 10-point favorites in Corvallis on Jan. 19, and two of the games against UC Riverside and California Baptist were decided in overtime, a pair of non-covers.

USC is averaging 75.4 PPG to rank 87th in the nation, while hitting 46.7 percent from the field to rank 56th in the nation. They're not a great 3-pointer shooting team, hitting just 33.4 from behind the arc to check in 199th overall. They're a horrible free-throw shooting team, hitting just 65.3 percent from the charity stripe to rank 315th, and that's something which could potentially hamper them once the postseason gets ratcheted up.

USC hasn't lost but three times this season, and Arizona State has been awfully shaky overall. The Sun Devils did play the Trojans fairly tough back on Jan. 9, losing by just nine in a low-scoring game, although USC had no trouble covering the four-point number on the road.

USC is just 2-3 ATS in the past five as favorite of 8.5 or more points. Arizona State has been brutal against the number, however, going 1-4 ATS in the past five, and 2-10 ATS in the previous 12. The Sun Devils are also 1-6-1 ATS in the past eight on the road, while the Trojans have covered five in a row. That being said, 13 is a little too high of a number for my liking.

WHERE TO BET ARIZONA STATE-USC