The Minnesota Golden Gophers (13-8, 6-8 Big Ten) hit the road for Bloomington to take on the Indiana Hoosiers (11-9, 6-7) in a battle of Big Ten teams in the middle of the pack. This is likely to be an important game for the postseason prospects of both squads.

Minnesota is looking to pick themselves up and dust themselves off after a 72-59 beating at the hands of Maryland last time out on Sunday, coming nowhere near a cover as three-point underdogs as the 'under' (138) connected. It's par for the course for the Gophers, as they have dropped all seven of their true road games this season.

It's been a tale of two seasons for the Gophers. They're actually pretty stout on their home court, winning 12 of 13 games, including victories over conference heavyweights Iowa, Michigan, Michigan State and Ohio State. But on the road, they're horrific. Their seven road game losses have been by an average of 18.4 points per outing.

Indiana got dusted 78-59 last time out on Saturday in Columbus by the Buckeyes, coming nowhere near covering a seven-point spread as the push (137) happened at most shops on the total.

The Hoosiers have had mixed results lately, which is a microcosm of their season. They got pounded by Ohio State, won in OT at Northwestern on Feb. 10, and they nipped a very good Iowa side on Feb. 7 after losing in overtime to Illinois on Feb. 2. You never know which IU team is going to show up, and they are very much capable of beating anyone in the conference. 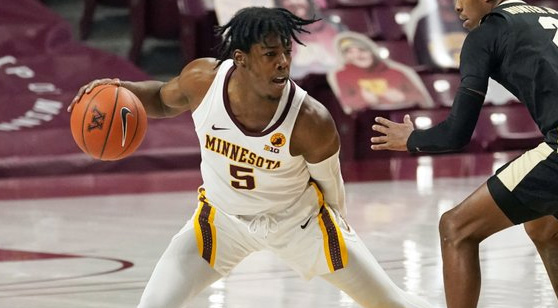 The Golden Gophers have been one of the best 'under' teams to follow with the low side cashing in 10 of the last 12. (AP)

The Gophers have won two of the past three games, with each of the victories coming on their home hardwood. As mentioned above, they're a completely different team on the road, losing all seven of their games while covering just once at Rutgers on Feb. 4 as 5.5-point underdogs in a four-point loss. That's as close as they have come to hitting against the number on the road.

Minnesota has cashed the 'under' in each of the past three games, averaging 69.7 PPG while allowing 67.0 PPG. The 'under' is also 10-2 across the past 12 outings for the Gophers.

The Gophers head into this one with 75.0 PPG to rank 97th in the country, and they are a very good free-throw shooting team at 75.4 percent, which ranks 49th in the country. They're a terrible shooting team, though, hitting just 40.3 percent from the field to rank 317th. They're even worse from long distance, going for just 29.4 percent from behind the arc to rank 323rd.

Minnesota is 6-2 ATS following a straight-up loss, and 5-2 ATS in the past seven after a non-cover.

The Hoosiers have been harder to figure than the Gophers. Indiana has actually won just once in the past four games at home. While they posted a signature win against Iowa on Feb. 7, winning 67-65 as 3.5-point 'dogs. But their three previous home games were losses to Illinois in OT on Feb. 2, against Rutgers on Jan. 24 and against Purdue on Jan. 14.

Indiana is favored by two buckets, and that's been the kiss of death. As a favorite of four or fewer points, the Hoosiers are 1-2 SU/0-2-1 ATS in the past three such situations. Still, based on Minnesota's production on the road, it's impossible not to like Indiana on its home floor.

The Hoosiers rank 162nd with 72.2 PPG, and they're 171st in field-goal percentage at 44.3. They're so-so in the 3-pointer department, going for 34.5 percent from behind the arc to rank 139th in the country. A good part of their struggles have been at the free-throw line, as they're hitting just 65.9 percent from the charity stripe, good for 300th overall.

On defense, IU ranks 152nd with 69.2 PPG allowed, while the opposition is hitting at a 42.0 percent clip from the field to rank 122nd. On 3-pointers, Indiana is allowing 34.1 percent, which is pretty good, ranking 211th in the nation.

Inside the Stats – Minnesota Golden Gophers

Indiana has been rather erratic lately, but they're good enough to beat anyone in the conference on a regular basis. They have ticked off wins against three of the top four teams in the league. Minnesota, on the other hand, hasn't won on the road this season, and they haven't even really come close. Why think they're going to turn things around now?

Yes, the underdog has connected in 15 of the past 21 meetings in this series, but Indiana only needs to cover by four. Minnesota has dropped their seven league games by an average of 18.4 PPG. Avoid the Gophers like the plague.