Another massive A-10 game is on tap for college hoops on Wednesday night, as the Richmond Spiders face the VCU Rams. This mid-major bubble clash is set for 7 p.m. (ET) and will air on the CBS Sports Network.

VCU enters this game as the -4-point favorite. The Spiders have seen success against the spread, covering eight of 13 games played this season. VCU is 10-9 on the ATS, coming off a huge home win against St. Bonaventure.

The point total is set at 143.5, which VCU tends to go UNDER on. The Rams have gone UNDER the point total in 12 of 19 games this season, while Richmond is essentially split at 7-6 on the O/U. 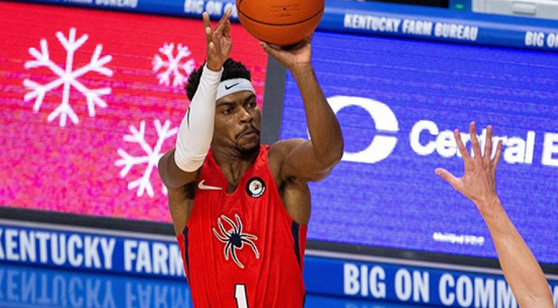 Blake Francis and the Richmond Spiders find themselves in a March Madness bubble game with conference foe VCU. (AP)

VCU enters this huge bubble game on a five-game winning streak, beating the then A-10 leading St. Bonaventure Bonnies on Friday. During the five-game streak, the Rams have held teams to 67 points or fewer - now allowing just 65 points per game this season which ranks 53rd nationally.

This explains why VCU sees the point total go UNDER more times than not, as the Rams own the 16th-most efficient defense in the country (90.6). VCU averages 10.2 steals per game (ranks third in the nation), while also averaging 5.5 blocks per game (ranks eighth in nation).

The Rams also make the most of their free throws, averaging 14.9 per game (ranks 72nd) which equates to a 75.7% average form the charity stripe (ranks 45th). Nah'Shon Hyland continues to be the offensive leader of this team, averaging close to 20 points per game.

He shoots over 86% from the free throw line (highest on team), and is one of two Rams that average over two steals per game. In a nutshell, he is the catalyst of this VCU team on both ends of the court. Hason Ward averages 2.3 blocks per game, as both he and Corey Douglas are typically overlooked when discussing the Ram's defensive strengths.

Richmond enters this road game winning four of it last five games. Richmond's consistency is an issue, but this team is still very dangerous.

The offense averages over 77 points per game, which ranks 67th nationally. Also, they hold an offensive efficiency rating of 109.9 which ranks 47th in the nation. They have four players average a double-digit point total, beginning with Blake Francis.

Francis averages over 16 points per game, while both Grant Golden and Tyler Burton each average over 13 points per game and 6.5 or more rebounds too. Burton is the only underclassmen for the Spiders' top five scorers, riddled with senior experience.

There is a massive drop off after the top five scorers however, as depth is the biggest concern for Richmond so far. The shooting makes up for the lack of depth, as Richmond ranks within the top 23 nationally for both two-point average (56.3%) and overall field goal percentage (48.9%). They also hit 36.3% of the three-pointers attempted (ranks 69th nationally).

Inside the Stats – VCU Rams

Inside the Stats – Richmond Spiders

This game is VCU's defense vs. Richmond's offense, which begs the question of which to trust more? Optics and statistics lean towards VCU here, so go that route. The Rams are 7-12 on the O/U this season, so leaning with the point total trends and VCU defense seems logical here.

The spread is a bit difficult to predict, as both teams do well covering. The point total bring a bit more conviction, along with VCU's defense at home compared to Richmond's offense on the road.