AAC action on Thursday night sees the Houston Cougars hit the road to take on the Wichita State Shockers. Tip is scheduled for 7 p.m. (ET) and will air on ESPN2 from the Charles Koch Arena in Wichita, Kansas.

Houston enters this road game as a double-digit favorite, given a -10-point spread. Houston has covered 13 of its last 18 games this season, while Wichita State has failed to cover eight of 14 games.

The point total is set at 137.5, which Houston tends to go UNDER on more times than not. Houston has gone UNDER the point total in 10 of 18 games this season, while Wichita State is split on the O/U at 7-7. 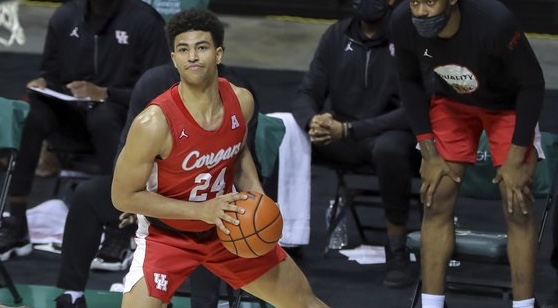 The Cougars have had a remarkable season so far, as this game doesn't seem to be any different. The strength of this club is the defense, which ranks second in the nation in terms of points allowed per game and defensive efficiency.

The Cougars have six players who average at least one steal per game, with Marcus Sasser leading the way. He also averages 15 points per game, while Quentin Grimes averages about 17 points per game to go along with 6.5 rebounds and 1.2 steals per game.

The Shockers can close to beating Houston last time out, only losing on the road by three points and scoring 70 against a team that only allows 57 points per game. Tyson Etienne, who leads the team in scoring, saw 25 points as Wichita State will need a similar performance to contend in this one.

Although Etienne is the leading scorer, he has disappeared against good defenses this season (vs. Memphis). If that's the case, then Dexter Dennis becomes the name to watch. He only averages eight points per game, but saw 18 against Houston which was the second-highest scoring total.

Etienne and Dennis are the only two names that scored a double-digit point total against Houston in game one, so expect Houston to zone in on Etienne and force another player to beat them. Alterique Gilbert and Morris Udeze are the next two highest scorers for Wichita, as one will more than likely have to score double-digits if Etienne is kept in check.

Inside the Stats – Houston Cougars

Inside the Stats – Wichita State Shockers

It's tough to go against Houston in this game, although the spread is very high. If you're cozy on the double-digit spread then go for it, but the high point spread should lead you to the point total.

Houston's defense is ranked second nationally for a reason, as the team averages under 60 points allowed per game. With the given 137.5, great Houston defense and the combined 15-17 O/U between both schools - lean UNDER here. It's unlikely both teams will cross the 70-point threshold again, so consider one to stay under 70 total points.

WHERE TO BET HOUSTON-WICHITA STATE