The No. 4 Ohio State Buckeyes travel to Bryce Jordan Center this Thursday to face the Penn State Nittany Lions. Tip-off on the Big Ten Network is slated for 8 p.m. (ET).

The Buckeyes go on the road as six-point favorites for Thursday night with the opening line for betting the total set at 147.5 points.

Ohio State is riding a straight-up six-game winning streak into Thursday’s contest while going 5-1 against the spread. The total has gone OVER or ended as a PUSH in five of the six games.

One of those Buckeyes’ victories was a four-point win against Penn State as seven-point home favorites on Jan. 27. They are 14-6 SU in the last 20 meetings but just 1-6 ATS in the last seven games between the two.

Penn State is 2-4 SU in its last six outings starting with the loss to Ohio State. It went 4-2 ATS in that same span with the total staying UNDER in its last four games.

The Lions are 4-12 SU in their last 16 home games against the Buckeyes. The total has gone OVER in four of the last five meetings overall. 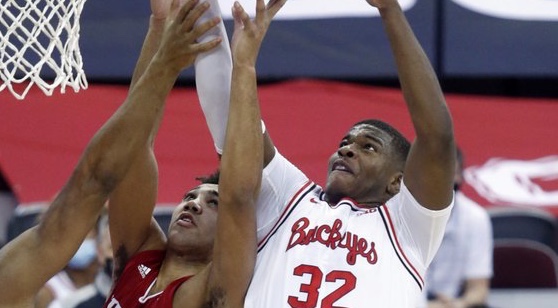 E.J. Liddell leads the Ohio State Buckeyes in points per game (15.1) and rebounds per game (6.7) ahead of Thursday's matchup with Penn State. (AP)

Forwards’ EJ Liddell (19 points) and Justin Sueing (16 points) led the way in Ohio State’s 19-point rout over Indiana on Saturday as a seven-point favorite at home.

Liddell is the team’s leader in both points (15.1) and rebounds (6.7) while connecting on 49.7% of his shots from the field. Guard Duane Washington Jr. is a close second in scoring with 14.6 points per game.

Defensively, they are giving up an average of 68 PPG. Ohio State has not allowed more than 65 points in four of its last six wins.

On Sunday, the Lions lost to Nebraska by one-point as 11-point home favorites. This followed a two-point loss to Michigan State on the road as four-point underdogs. They are now 4-9 SU in Big Ten play this season.

Guards’ Myreon Jones (14.9 points) and Izaiah Brockington (13.8 points) are Penn State’s top two scorers. Brockington is shooting 43.2% from the field and Jones is hitting 39.8% of his shots from three-point range.

The Lions are averaging 72.5 PPG and shooting 41.1% from the field. This drops to 33.8% on their three-point attempts. They do matchup well under the boards with 36.2 rebounds a game.

Win or lose, Penn State has not allowed more than 62 points in each of its last three outings. The team’s points-allowed average on the year stands at 72.7 PPG.

Give credit to Penn State for keeping the first meeting this season closer than expected on the road. However, since that game, these two conference rivals have gone in different directions.

Even with the home court advantage in the rematch, I do not see the Lions keeping this game closer than the current spread. Take Ohio State both SU and ATS.

I do see the total line trends in this series holding true on Thursday night with the game going OVER. These teams combined for 162 points at Penn State in late January against a closing line of 147 points.

WHERE TO BET OHIO STATE-PENN STATE