A big showdown in the Big 12 this Wednesday night pits the No. 12 Texas Longhorns on the road against the No. 9 Oklahoma Sooners at Lloyd Noble Center.

Oklahoma gets the opening nod against its bitter rivals as a slight one-point home favorite. The betting line for the game’s total opened at 140.5 points.

The Longhorns rolled over TCU by 15 points on Saturday as -11.5-point home favorites. However, this was just their third straight-up win in their last seven games while going 1-6 against the spread. The total stayed UNDER against TCU after going OVER in nine of their previous 10 outings.

Texas lost to Oklahoma by one point as a three-point home favorite on Jan. 26. It is 1-2 (SU and ATS) in the last three meetings but 5-1 ATS in its last six road games against the Sooners.

Oklahoma has won seven of its last eight games SU and it is 10-2 ATS over its last 12 contests. This run is highlighted by recent road victories against Alabama and West Virginia as an underdog. The total has gone OVER in four of its last six games.

The Sooners have a SU six-game winning streak at home. As a trivia trend, the total has stayed UNDER in its last eight home games played on Tuesdays. 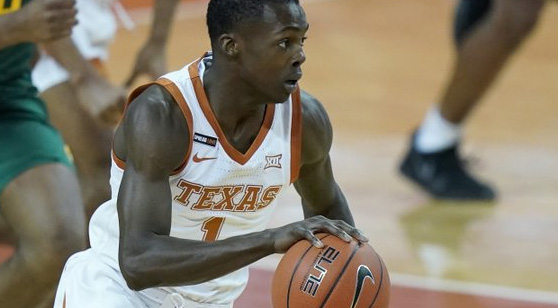 Texas has been a very strong bet on the road this season, going 6-1 outside of Austin. (AP)

Texas (7-4) is a half game in back of Oklahoma (8-4) in the current Big 12 standings with Baylor setting the pace. Andrew Jones deserves a good deal of credit for Saturday’s win against TCU with 19 points.

The junior guard has now exceeded his 15.9-point scoring average in each of his last four starts. He is shooting 42.9% from the field and 32.2% from three-point range. Jones is one of five Longhorns averaging at least 12 points per game.

Defensively, the Longhorns have allowed 75 points or more in four of their last five games. The season average in points allowed has jumped to 67.6 PPG.

Oklahoma’s double-overtime upset against West Virginia on Saturday should provide a huge boost towards pulling off the season sweep against Texas. Austin Reaves finished that game with 28 points.

He continues to lead the team across the board in points (16.6), rebounds (5.6) and assists (5.4). The senior guard is shooting 44.2 percent from the field but just 23.1 percent from three-point range. Guard De’Vion Harmon is second in scoring with 12.6 PPG as one of four players in double figures.

On paper, these rivals matchup really well against one another. The first meeting this season also bears this out. Texas would get the betting edge in this series ATS playing on the road.

However, my betting edge for Tuesday night goes to Oklahoma coming off Saturday’s big win. Look for the Sooners to keep things rolling with the season sweep over Texas SU and ATS.

I also see the total going OVER the current total line. Recent trends for each team favor this play, and it is going to take some points to win this game while defense takes a backseat for the night.

WHERE TO BET TEXAS-OKLAHOMA