The Arizona Wildcats enter another difficult road game against conference foe the USC Trojans. Tip for this Pac-12 clash is set for 6 p.m. (ET) from the Galen Center in Los Angeles, California.

The point total is set at 140.5, which favors the OVER slightly. While Arizona is split at 11-11 on the O/U, the Trojans have gone OVER the point total in 12 of 21 games this season. 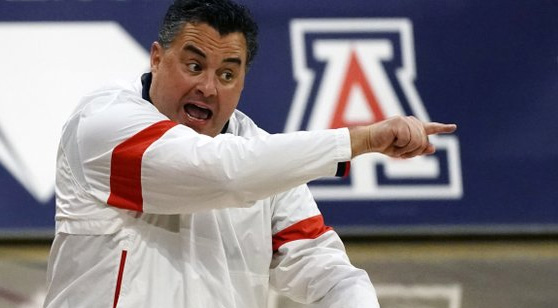 Sean Miller and the Wildcats are 0-2 in their last two conference road games after starting 4-0 as visitors. (AP)

The Wildcats are coming off a tough loss to UCLA, in which they competed well until the second half. Arizona still has the nation's 56th-most efficient offense, with James Akinjo taking complete command of the top point scoring option.

However, the Wildcats have failed to score more than 61 points in three straight games, unsettling for a club that averages 75.8 per game. Also note that Arizona is limping into its second straight road game, and fourth over its last six games. Arizona has lost the last three road games, now facing an underrated and dangerous USC team.

For Arizona to stand a chance, they need the offense to come to full light again. Akinjo and Azuolas Tubelis scored plenty against UCLA, but others such as Bennedict Mathurin and Terrell Brown Jr. have to score more than five points to rattle a very good USC defense.

USC has won five of its last six games by a double-digit point total, which includes a win over then No. 21 ranked UCLA. Also note that the Trojans have only allowed 69 points or less in 10 of its last 12 games. The 18-3 SU and 14-7 ATS record is not by accident, as this is a well balanced team with plenty of intruding ingredients for a March Madness sleeper.

The ATS trends would point towards siding with USC, covering in 14 of 21. Also, Arizona is a woeful 8-14 on the ATS. USC is the better team and playing inside an arena they rarely lose in. Its always possible Miller's club comes out with a great offensive performance, as they've done in the past.

If uneasy on the spread then take the OVER, although the spread has the better ATS odds to play off of. USC should clear 70 points, while Arizona's point total makes the thought of this market more uncertain