An early Big Ten battle on Saturday sees the struggling Michigan State Spartans taking on March Madness bubble team the Indiana Hoosiers. Tip is set for noon (ET) and will air on ESPN. 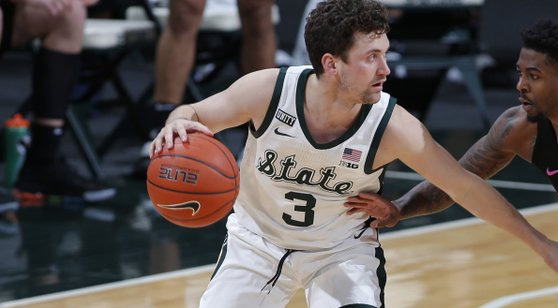 Indiana opens as the home favorite, given a -5-point spread although the line has jumped to -6 with some. Indiana is 12-8-1 on the ATS, while Michigan State has failed to cover the spread in 15 of 19 games this season.

The point total is set at 134.5, which is split when combining the point total records for both schools. Michigan State has gone UNDER in 11 of 19 games this season, while Indiana is 11-9-1 on the O/U.

Offense has been a huge issue for the Spartans in recent games, scoring 66 points or less in four straight. They've also lost five of their last six road games, with the only win coming against Nebraska. Joey Hauser is the name that needs to step up, averaging about 10 points per game which should be much higher based on the talent he displayed at Marquette last year.

Aaron Henry has done a good job carrying the workload, but a big issue might be the lack of playing time Julius Marble is getting. He sees less minutes per game than both Thomas Kithier and A.J. Hoggard, despite averaging more points per game.

Michigan State is in desperate need of some offense, which he supplies. Perhaps evening the playing time among those three players would see the offensive numbers move up. Overall though, the burden of responsibility from a player standpoint lands on Hauser here. He needs to step up, plain and simple.

Good luck guarding Trayce Jackson-Davis if you're Michigan State. The sophomore monster averages almost 20 points and 10 boards per game, and he's still growing both physically and within the game itself. After an awful showing against Northwestern, he has responded nicely with back-to-back 20-point games.

He has seen a double-double in four of his last five games, with nine rebounds in the fifth game where he came up short. Also expect a big game from Armaan Franklin who is due for a solid performance. He saw 23 points against Northwestern, keeping them alive throughout despite being a game Indiana should've lost.

He is coming off an 11-point performance against Minnesota, but has also scored three points or less in two of the three games prior. With Michigan State's defensive issues, it wouldn't be a surprise to see Franklin take advantage of a slow back court.

The home court advantage stands out here, as Indiana has won two straight games at home. The Hoosiers lost to Illinois in overtime at home prior, and also lost to Rutgers by just four points at home. They're playing well in Bloomington lately, and even held a high-scoring Iowa team to just 65 points inside Assembly Hall.

Indiana should touch 70 points, and the point total is tempting to go OVER based on the point spread. The best odds to play lie with Michigan State's however, as they are just 4-15 on the ATS. It's almost impossible to overlook the fact that Michigan State has failed to cover the spread in 15 of 19 games, so play the smart odds here and take Indiana to cover at home.

WHERE TO BET MICHIGAN STATE-INDIANA