The Penn State Nittany Lions take on the Iowa Hawkeyes in a Big Ten battle on Sunday afternoon. Tip is scheduled for 5 p.m. (ET) from the Carver-Hawkeye Arena in Iowa City, Iowa.

Iowa is a double-digit point favorite, given 12 points to the visiting Nittany Lions. Penn State is split on the ATS at 9-9 this season, while Iowa has covered 13 times over its last 22 games.

The point total is set at 157.5, which is very high for the college basketball average. Iowa has gone OVER in 12 of 22 games, posting one of the highest scoring offenses nationally. Penn State has gone UNDER in 10 of 18 games this season. 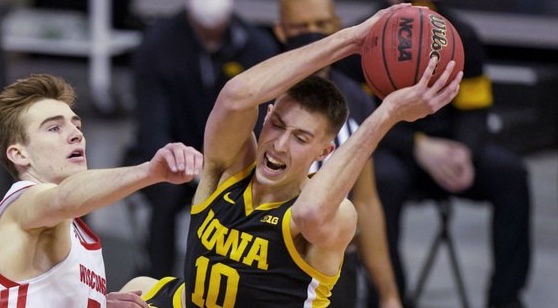 Iowa looks to win its fourth straight game before heading into a three game stretch against Ohio State, Michigan and Wisconsin. (AP)

Penn State is a difficult team for any school to face, as the 7-11 SU record is a bit misleading when you consider the Nittany Lions strength of schedule ranks first nationally. They average 73 points per game while allowing 73.8, so this makes betting on them a nightmare.

They rebound on offense very well, ranking 34th nationally with 12.4 per game. They also hit a lot of three-point shots, and average 7.7 steals per game (ranks 61st nationally). They have a good balance of scoring in Myreon Jones, Izaiah Brockington and Seth Lundy - while also seeing solid post play from senior John Harrar.

Penn State has kept their last four games within striking distance, which includes scoring 82 against Ohio State. Iowa is a tough outing inside Iowa City, but Penn State's offense is capable of scoring on Iowa's inconsistent defense.

Iowa ranks fourth nationally in points per game with almost 90, while also holding the third-highest efficiency rating in the nation at 121.5. Luka Garza is the heartbeat of this team, riddled with terrific role players from Joe Wieskamp to Keegan Murray.

The Hawkeyes lean on length for their defensive success. Despite a sluggish showing through most of the 2021 season, Iowa's defense has played pretty well in recent games. The Hawkeyes have allowed 67 points or less in four straight games, so its encouraging to see the improvement from Fran McCaffery's squad.

It is the only achilles heel for this club, so if Iowa can hold an underrated Penn State offense to 70 points or fewer it will be more steps in the right direction. Iowa should touch 70 points, and has no reason to lose this game if they touch 70 points. So this is a great test for McCaffrey's defense entering a critical time of the schedule.

The high spread is concerning, and Penn State covered the given +12-point spread against Ohio State (only lost by 10). The point total seems like a good play to go OVER, but that's also going against Iowa's newfound love for playing defense.

This is a tricky game to wager on, but 12 points is quite a lot for a defense notorious for allowing way too many points and an offense with nothing to lose on the road. The conviction, barely, lies with the point total based on each team allowing over 70 points per game - and each offense capable of touching 80.

WHERE TO BET PENN STATE-IOWA