The Oregon Ducks hit the road for a massive Pac-12 hoops game, taking on the conference-leading USC Trojans. Tip for this big clash is set for 9 p.m. (ET) and will air on FS1.

USC gets the nod from sportsbooks, given a -5-point spread at home. The Trojans have covered 14 of their last 22 games, while Oregon is split on the ATS at 9-9. 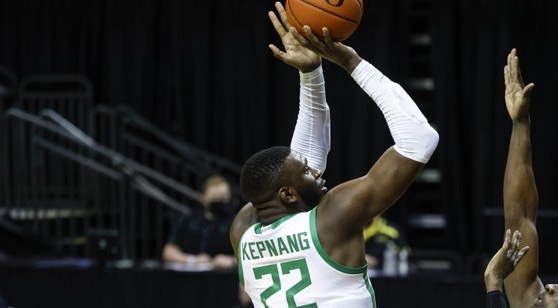 The Ducks are fully healthy, and on a four-game winning streak which includes a home stand against Colorado. A true test emerges in Los Angeles, as a difficult Trojans team stands in their way. Chris Duarte and Eugene Omoruyi can take over any game, each averaging over 17 points per game.

Oregon also holds the 87th-most efficient offense, shooting high percentages all over the court. They shoot 46.2% from the field (ranks 69th), they shoot 52.7% from two-point range (ranks 87th), and shoot 35.5% from three-point territory (ranks 99th).

USC is coming off a tough home loss to Arizona, snapping a seven-game winning streak for the Trojans. It also marked the first game USC surrendered 80-plus points over its last 20 games. The last time USC allowed that many points was to Cal Baptist on Nov. 25 in the first game of the season.

Things don't get easier, as a dangerous Ducks' offense with surging momentum await. The play of Tahj Eaddy is enormous in this game, as the senior who averages over 13 points per game will be leaned on in key situations of this game. He played well against Arizona, and will need a similar performance against Oregon.

Evan Mobley is the most important player however, and will have to continue his dominant play as well. Although Drew Peterson has lacked production lately, Isaiah Mobley has picked up his. He is close to averaging a double-double, recording a double-double in two of his last four games.

It's tough to pick against Oregon here, as the team has all of the momentum entering this game. USC is the better team currently, but Oregon definitely can claim top team in the conference if not for various game cancellations this season. With the spread a bit of a toss up, the OVER seems to be a good choice here.

Each team averages over 70 points per game, while allowing just under that total. Assuming the game is close and that each team can come close to their point total, the OVER should clear.